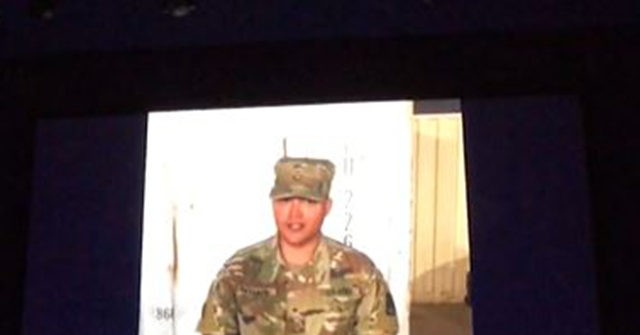 A soldier stationed in Kuwait gave his daughter the surprise of a lifetime, even if he could not be there to present that surprise in person.

The daughter had been telling her mother for some time that she did not want to turn four years old without her father. So on Saturday, Isabella Franco received a surprise heartwarming message from her father, Chief Warrant Officer Luis Franco, that made her dream come true.

During Isabella’s roller-skating birthday party, her father appeared on a video message to sing “Happy Birthday” and wish her well on her special day.

“Hey Bella! It’s dad! How are you? I wanted to wish you a happy birthday baby and I hope you’re well… Hey I love you and have fun at your party! Love you guys,” Chief Warrant Officer Franco waved as the video signed off.

“I love you, Daddy! Love you,” Isabella said as she waved and gazed upon the screen.

“It feels like he was here, so I want to thank the skating rink for doing that because that message was awesome and it was much needed,” Ashley Franco, Isabella’s mom, told WATE.

The Franco family has three children and this is the first time Chief Warrant Officer Franco is away from the family for an extended period of time.

Chief Warrant Officer Franco has been serving overseas in Kuwait for over a year and is expected to return from his deployment in October 2020.