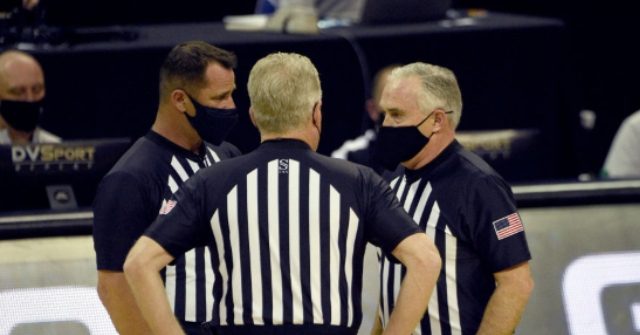 The coronavirus is clearly still vexing the sports world this week as six March Madness referees were sent home after some of them violated coronavirus policies.

According to the New York Post, four of the refs are ranked among the league’s top 12 officials and included Ted Valentine, John Higgins, Kipp Kissinger, and Roger Ayers. The four top officials were scolded for not staying in their hotel rooms ahead of the game per the tournament policy. It appears that they went to a steakhouse together before checking into their rooms after finding out the rooms weren’t ready for occupancy.

The four were reportedly tested for coronavirus that night, and one was found with a positive result. But the one positive result knocked out the other three due to contact tracing rules.

“The NCAA has replaced several officials for March Madness because of a positive COVID-19 test,” the NCAA said in a statement. “Based on tournament protocols and contact tracing with local public health authorities, these officials may not participate in the tournament. … Four replacement officials have been previously approved and meet the pre-tournament testing protocols. Two of the officials will not be replaced.”

The NCAA brought in 60 out of 109 available refs for the tournament, which begins on Thursday.

“We had to narrow that scope this year to 60 just because of the unusual nature of having this all in a controlled environment in one city,” said NCAA senior vice president of basketball Dan Gavitt. “But if you extrapolate that 77 who were identified and approved — an additional 17 as replacement officials — you’re still way within the number we use on an annual basis of 109. It’s a great opportunity for some additional officials due to an unfortunate circumstance, but we’re very confident we’ll have an outstanding staff for the tournament.”

Gavitt also noted that there had been five additional positive tests out of the 2,300 people involved in the tournament. He did not name the other officials sent home.