From Protestant churches in South Korea to St. Peter’s Basilica at the Vatican, worshippers followed national or local regulations aimed at preventing the transmission of the coronavirus. In some traditionally Roman Catholic countries in Europe, Easter featured a new ritual: lining up to get a COVID-19 vaccine.

At a hospital in the Lombardy region of Italy, where the pandemic first erupted in the West in February 2020, a hospital gave a traditional dove-shaped Easter cake symbolizing peace to each person waiting to get vaccinated. Many of the ones who came were in their 80s and accompanied by adult children. 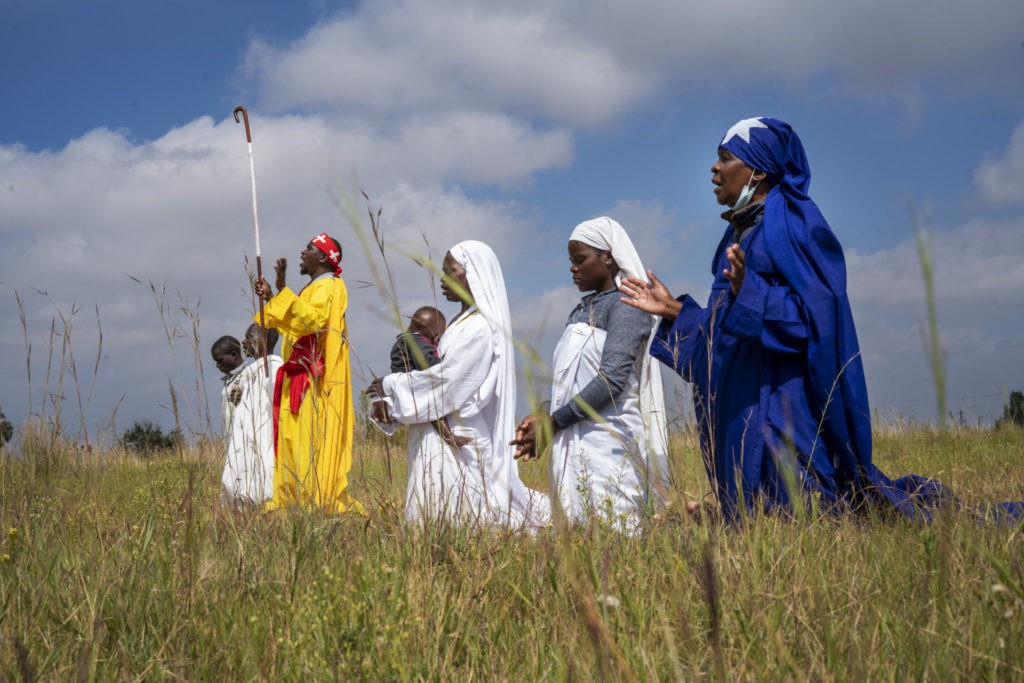 A local soccer team in Lyon, France, opened its stadium as a vaccination center for the long holiday weekend. Some 9,000 people were expected to receive their shots there over three days as the French government tries to speed up the pace of vaccinations amid a fresh outbreak of infections.

In the Holy Land, air travel restrictions and quarantine regulations prevented foreign pilgrims from flocking to religious sites in Jerusalem during Holy Week, which culminates in Easter celebrations. Pope Francis lamented that over the last year, the pandemic has prevented some churchgoers from attending worship services.

Inside St. Peter’s Basilica, the 200 or so faithful who were allowed to attend looked lost in the cavernous cathedral. Normally, thousands would attend the Mass celebrated by Francis, and a crowd would gather outside in St. Peter’s Square, with more than 100,000 sometimes assembling to receive the pope’s special Easter blessing after Mass.

But this year, like last year, crowds are banned from gathering in Italy, and at the Vatican. Francis delivered his noon Easter address on world affairs from inside the basilica, using the occasion to appeal anew for the international community to step up to ensure vaccines reach people living in the poorest countries. 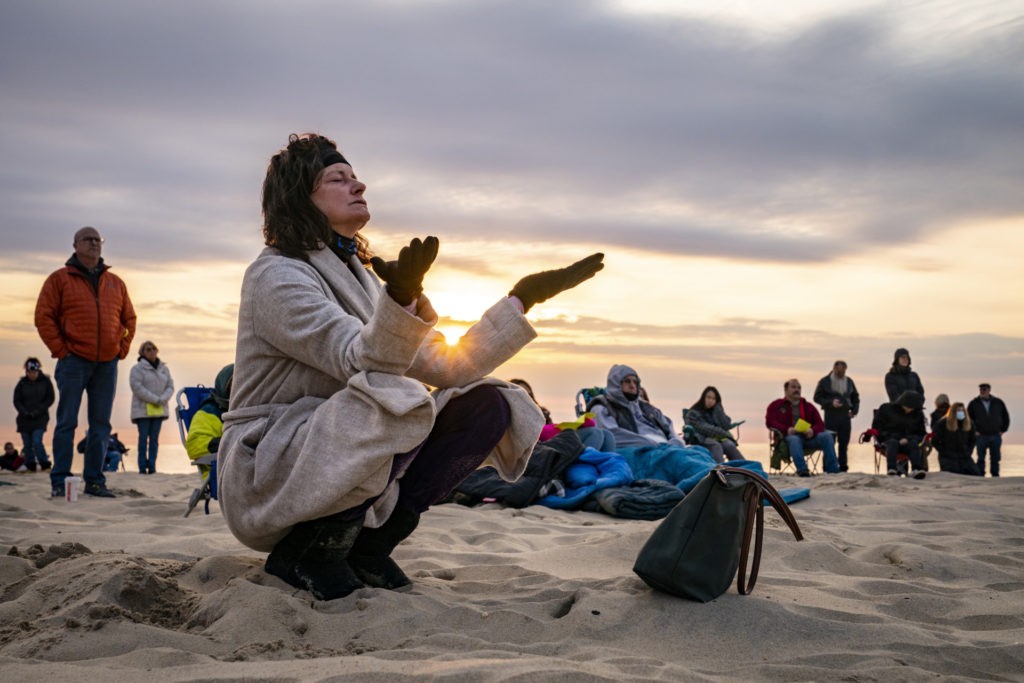 The pontiff sounded weary as he noted that pandemic worries and protective measures have crimped religious holiday traditions in many places and at times kept some faithful from engaging in public worship.

“We pray that these restrictions, as well as all restrictions on freedom of worship and religion worldwide, may be lifted and everyone be allowed to pray and praise God freely,″ Francis said.

In Jerusalem, the Easter service at the Church of the Holy Sepulcher was celebrated by Latin Patriarch Pierbattista, the senior Roman Catholic cleric in the Holy Land. The site in Jerusalem’s Old City is where many Christians believe Jesus was crucified, buried and rose from the dead. 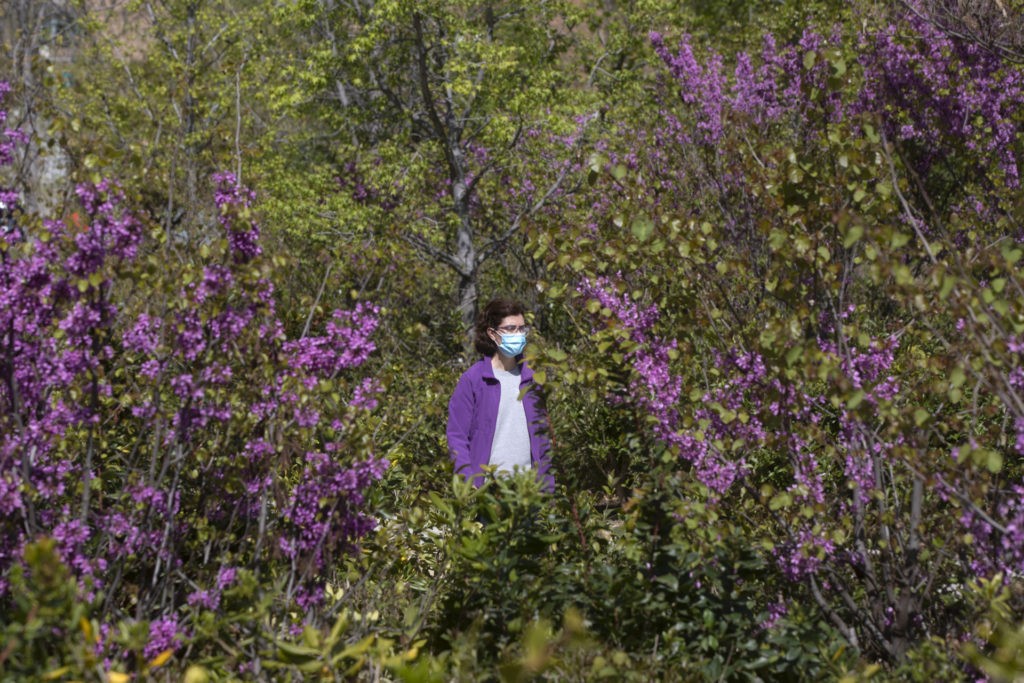 A woman wearing a protective mask walks in a park in Madrid, Spain, Sunday, April 4, 2021. Residents of Madrid are spending the Easter holidays in the city and nearby areas during a perimeter lockdown in the Madrid region due to the coronavirus pandemic. (AP Photo/Paul White)

Israel has launched one of the world’s most successful vaccination campaigns, allowing the country to reopen restaurants, hotels and religious sites. Israel captured the Old City, home to holy sites of the three Abrahamic religions, in a 1967 war and later annexed it in a move unrecognized by the international community.

In South Korea, Yoido Full Gospel Church, the biggest Protestant church in the country, allowed only about 2,000 church members to attend Easter service, or about 17% of the capacity of church’s main building. Masked church members sang hymns, clapped hands and prayed as the service was broadcast online and by Christian TV channels.

Intent on tamping down weeks of surging infections, the Italian government ordered people to stay home during the three-day weekend except for essential errands like food shopping or exercise. Premier Mario Draghi did grant a concession. permitting one visit to family or friends per day in residents’ home regions over the long weekend, which includes the Little Easter national holiday on Monday.

Italy has permitted religious services for months as long as capacity is limited and participants wear masks. Early on in the pandemic, the country’s churches were closed to group services and only open for individual prayer. 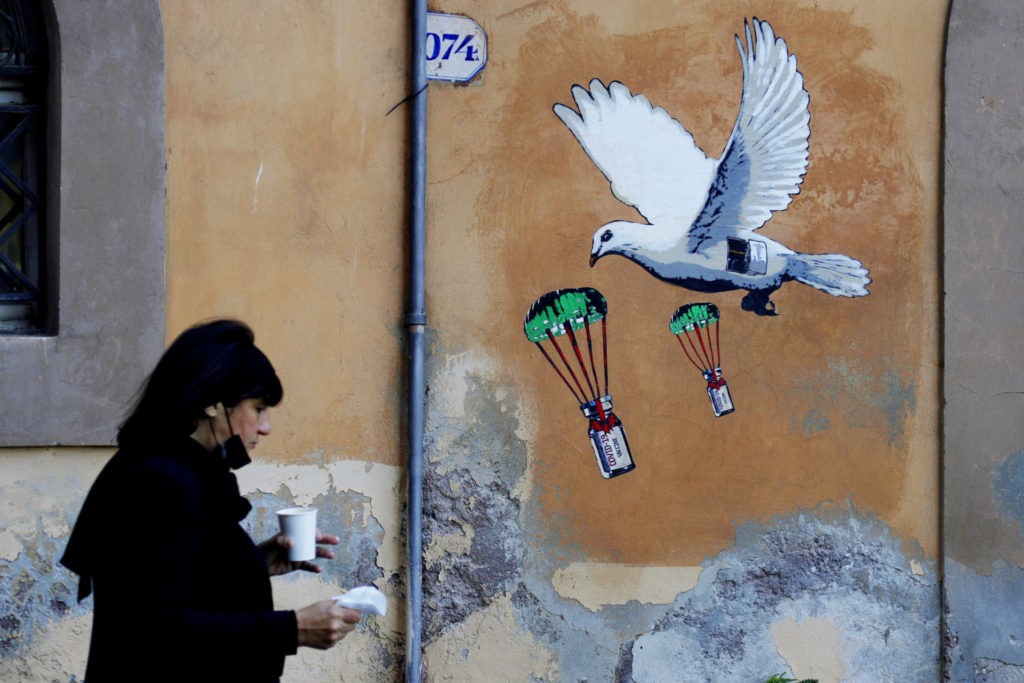 A woman walks past a mural depicting a white dove parachuting COVID-19 vaccine vials, posted near the Italian Health Ministry Headquarters in Rome, Sunday, April 4, 2021. Italy has entered a three-day strict nationwide lockdown to prevent new surges of the coronavirus. Police set up road checks to ensure people were staying close to home and extra patrols were ordered up to break up large gatherings in squares and parks. (AP Photo/Gregorio Borgia)

Attending a Saturday night Easter Vigil Mass is a popular practice for many in Italy. But with the nation under a 10 p.m. to 5 a.m. curfew, churches moved up the traditional starting times by a couple of hours. Church bells in Italy summoned people to services unusually early, tolling before sunset in some places.

A similar scenario played out in France, which is reeling from a frightful uptick in COVID-19 cases that are overtaking already strained hospitals. Some French churches held their traditional midnight Easter services just before dawn Sunday instead of on Saturday night because of a nationwide 7 p.m. to 6 a.m. curfew.