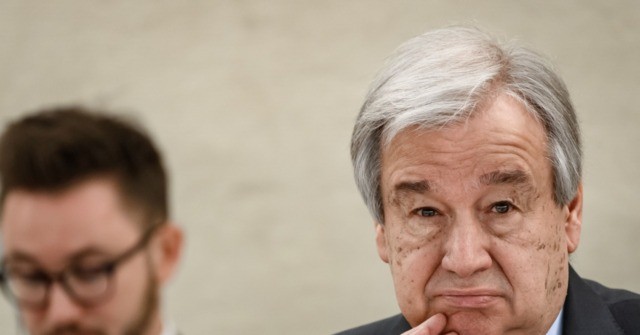 As the world grapples with the Chinese coronavirus pandemic, ongoing turmoil in the Middle East and Beijing’s brutal interventions in Hong Kong, the organization once charged with offering solutions to such problems is sidelined with nobody listening to its calls for “peace, harmony and global unity.”

U.N. Secretary-General Antonio Guterres has bemoaned a “lack of leadership” during the world’s worst series of crises since 1945. “Where we see power, we sometimes do not see the necessary leadership,” he said recently.

AFP reports even after more than two months of negotiations, the 15 Security Council members are still unable to reach agreement on a resolution supporting a call from Gutteres for a global cease-fire while the world battles the Chinese coronavirus.

At the U.N., there is a sense the globalist body is drifting and dysfunctional, even as it continues to plead for more money to fund its operations:

“In the past, when you had disagreements among members of the Council, it was compartmentalized,” said a U.N. official, speaking on grounds of anonymity to AFP. “So your adversary one day on a particular issue was your best ally the next day on another issue. What we see now is everything spilling over.

“So there are camps, or there are disagreements which just spill over from one issue to another,” the official said, clearly alluding to the situation in Hong Kong, where tough new Chinese security legislation has pitted the two leading permanent members of the U.N. against each other.

“The tensions between the U.S. and China are really problematic” for the world body, meaning the Security Council is “not able to move forward on a range of things,” the official added.

At a press conference Thursday, Guterres expressed his regret the coronavirus pandemic had not evoked a greater sense of unity from world powers.

As Breitbart News reported, Guterres has been working for months to secure a global ceasefire to enable countries to stop the spread of the virus that first appeared in the Chinese city of Wuhan late last year.

Today I am calling for an immediate global ceasefire in all corners of the world.

It is time to put armed conflict on lockdown and focus together on the true fight of our lives – the #COVID19 pandemic.https://t.co/F6JRA6ekvZ pic.twitter.com/7WgtFMk5GC

Oxfam International is just one global charity to register its frustration with the U.N.’s impotence, publishing a report saying the globalist cause has been totally ignored.

The cease-fire remains unattained due to the Security Council’s “diplomatic failure” to collectively broker a resolution amid the deadlock, the Oxfam report observed, and its absence is expatriated by years of investment in peace-building and countries continuing to sell weapons for use in war-torn regions.

“We expect leadership from the council as well as many of those countries who say they support a cease-fire, but who nevertheless remain active participants in conflicts around the world conducting military operations, selling arms and supporting third parties,” Oxfam Interim Executive Director Jose Maria Vera said in a statement.

The U.N. recently called for $2 billion to be transferred from wealthy countries to the poor via the globalist body as an aid in tackling the global pandemic which fell short.

The slim financial response prompted another call for funds last month, lifting the target to $6.7 billion to accommodate the U.N.’s all new, specially updated global plan to counter the viral epidemic.

Trouble is, nobody is listening to a word the U.N. says, even as it burns through those member financial contributions and a yearly budget of $3,073,830,500 it approved for itself to cover the year 2020.