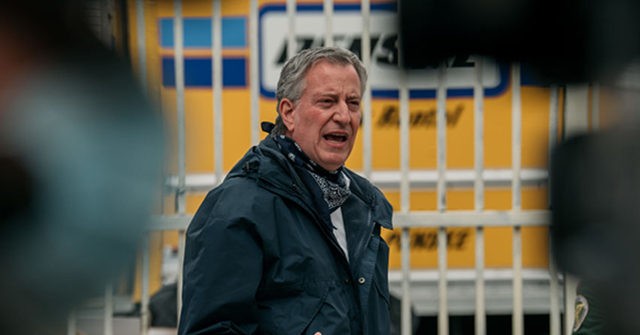 As of Thursday, figures from Mayor Bill de Blasio’s (D) New York City show shootings are up 92.4 percent from the same time in 2019.

The New York City Police Benevolent Association tweeted Thursday that the number of shooting victims in 2020 is up nearly 100 percent, as compared to this same time in 2019.

Another mass shooting on the streets of NYC leaves 6 people shot, one fatally.

With another 4 days to go, shooting victims this week are already up almost 100%.

Such violence and death is raging in NYC although it is one of the most gun-controlled locations in the U.S. It exists under the umbrella of the SAFE ACT, which was signed into law following the December 14, 2012, attack on Sandy Hook Elementary School in Newtown, Connecticut.

The SAFE Act bans the sale of “assault weapons” and requires registration of such weapons in situations where they were owned prior to the law taking effect. The Act also requires the registration of ammunition, bans the purchase of magazines holding more than ten rounds, and instituted universal background checks for gun sales.

Also, NYC’s concealed permitting process is on a “May Issue” basis, which means the reviewing officer is the ultimate arbiter of whether an applicant gets a license.

Despite these, and numerous other gun control measures, NYC is seeing a surge in shootings and shooting victims.

ard-winning Second Amendment columnist for Breitbart News, the host of the Breitbart podcast Bullets with AWR Hawkins, and the writer/curator of Down Range with AWR Hawkins, a weekly newsletter focused on all things Second Amendment, also for Breitbart News. He is the political analyst for Armed American Radio. Follow him on Twitter: @AWRHawkins. Reach him directly at awrhawkins@breitbart.com. Sign up to get Down Range at breitbart.com/downrange.