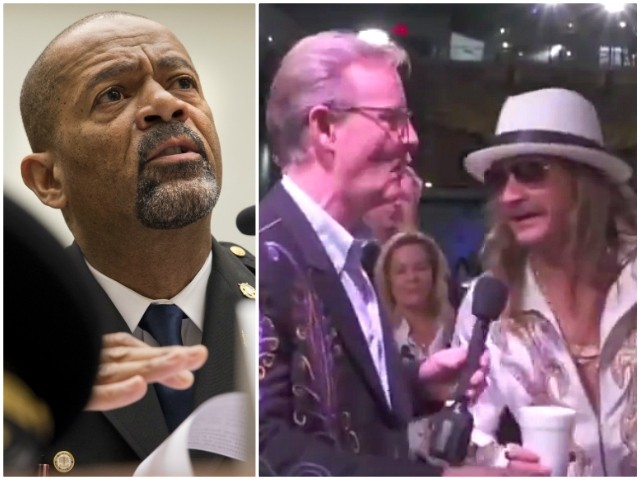 In an interview with Steve Doocy on Fox News’ Friday, Kid Rock called Behar a “bitch” who is the only person in the world he does not love and respect.

“We can disagree and still be cordial with one another and just talk about things without going for each others throats and protesting everything,” Kid Rock said in a live interview with host Steve Doocy. “God forbid you say something a little bit wrong you’re racist, homophobic, Islamophobic… people need to calm down, a get a little less politically correct, and, I would say love everybody. Except I’d say screw that Joy Behar bitch, everybody but that.”

Doocy apologized on air for his guest’s remarks, while back in the studio Fox host Ainsley Earhardt also apologized to viewers for airing Rock’s comments.

“We do need to apologize,” Earhardt said. “We don’t feel that way about Joy Behar.”

Sheriff David Clarke later took Fox & Friends to task over their supposed remorse, arguing that the show had “become part of the problem.”

“Host Steve Doocy noted that we should be able to discuss things “without going for each other’s throats,” Clarke wrote. “Really? Fox&Friends has become part of the problem. Now it’s our fault. Left says ANYTHING they want with impunity. Good for @KidRock Behar is a BITCH.”

Host Steve Doocy noted that we should be able to discuss things “without going for each other’s throats.” Really?
Fox&Friends has become part of the problem. Now it’s our fault. Left says ANYTHING they want with impunity. Good for @KidRock Behar is a BITCH https://t.co/NfWOWVnBf1

Joy Behar has a history of making controversial remarks in defense of her left-wing beliefs. Earlier this year, she mocked Vice President Mike Pence’s Christian beliefs by suggesting he had a “mental illness,” while declaring that Republicans have a “penchant for Nazis.” She has also attacked Fox News, describing it as a “sleaze factory.”

On Friday’s edition of The View, Behar responded to the controversy by saying that she would be happy to invite Rock on the show.

“All I can say is this bitch, and these bitches will be happy to have you on the show and have a beer,” she said.