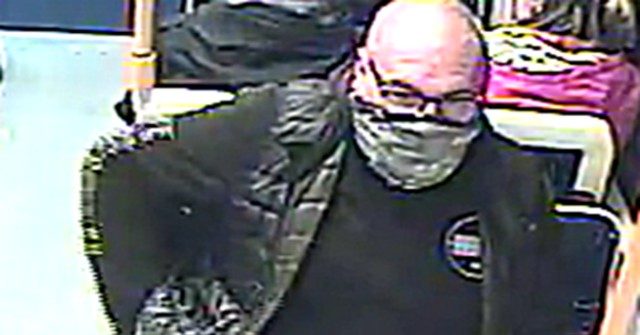 Police are on the hunt for a man who punched a passenger in the face because he took his mask off on a tram to speak to his nonagenarian mother.

Lancashire Constabulary released images of the suspect on Monday, describing him as a heavy-set 30-year-old, being 5’6″ tall with a shaved head and glasses. At the time of the attack on September 4th, he was dressed all in black with a grey mask across his mouth and nose.

The police force said that the attack occurred at 8:30 pm on a tram in the north-west seaside town of Blackpool. The victim, aged in his sixties, had removed his mask to speak to his mother, who is in her nineties and hard of hearing.

A man then “came up behind him, demanded that he put his mask back on then punched him in the face. He was left with bruising around the eye,” Blackpool Police said in a statement. Under coronavirus law in the UK, it is mandatory to wear a mask on public transport.

PC Laura Alves said: “This was a shocking attack on a man who was simply trying to speak to his mother who is hard of hearing. We urgently need to speak to the man in the CCTV still, and I would ask that anyone who recognises him to contact police. Similarly, I would appeal to the man directly to contact us if you see this appeal.”

In recent weeks, there have been reports of Britons turning each other in to police over perceived contraventions of coronavirus laws.

After ministers encouraged Britons to snitch on their neighbours if they believed they had broken the rule that limits socialising to six people, forces reported having to increase staffing on their telephone lines to keep up with the number of calls. In one case, a woman called the police on a funeral wake because she thought people were standing too close together. She had claimed it was her “public duty” to call the authorities on the mourners.

In one extreme case of overenforcement of social distancing rules, a funeral director interrupted a service at a crematorium in Milton Keynes because two men had moved their chairs next to a grieving widow in order to comfort her. While another crematorium in Wales banned the recitation of the Lord’s Prayer because chanting could spread coronavirus. Earlier this month, the government outlawed chanting, singing, talking loudly, and playing instruments at places of worship.

Meanwhile, the University of York issued fresh guidance last week after initially telling self-isolating students that if they hear a fire alarm, they should wait one minute before exiting their room, to allow healthy people to evacuate first.