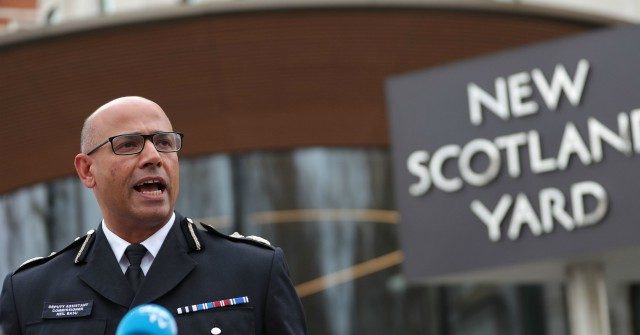 London’s assistant commissioner for police Neil Basu said he would “probably” have joined Black Lives Matter protests if he was not a police officer, despite activists having already injured at least 60 of his officers.

Assistant Commissioner Basu is the highest-ranking officer in the UK from an ethnic-minority background, one of the top six officers in the Metropolitan Police Service, and one of 50 senior officers across the country.

Black Lives Matter protests have brought central London to a standstill during the past week, in response to the death of American George Floyd while in police custody in Minneapolis, Minnesota.

Speaking to the left-wing Channel 4 News on Wednesday, host Cathy Newman asked the top-brass policeman if he would have been with protesters had he not been an officer. Mr Basu replied: “Really? Probably.”

London officers have been subjected to serious assault while trying to police the far-left protests. In one instance, a police horse threw his rider after being spooked by a protester throwing a bicycle at another animal. The officer’s injuries were so severe — including broken ribs, a collapsed lung, and a broken collar bone — she has been signed off from work for four months. Another officer was seen walking away from protests last week with a bloodied face down Whitehall. Outside of the Houses of Parliament, a group of his colleagues were chased by BLM protesters shouting “run, piggy, run!” while hurling glass bottles at them.

In an assault on Wednesday unrelated to the protests — which Nigel Farage, however, considers inspired by BLM protest fueling “hatred” of the police — a group of thugs assaulted two police officers, one of which was a woman, with some of the suspects even filming the incident.

Ken Marsh, chairman of the Metropolitan Police Federation, has criticised London’s lax policing tactics, saying that they should be dealing with maintaining public order more robustly. He also criticised the city’s Labour mayor, Sadiq Khan, for failing to protect officers.

In response to Mr Marsh’s criticisms, Assistant Commissioner Basu said: “I don’t agree with that comment. I don’t agree that that is the face of public order policing in the UK today.”

Mr Basu had said on Wednesday that “taking a knee was and is a powerful symbol of challenge and hope”. He continued that he was “moved to see some of our officers do so” — the remarks coming after Met chief Cressida Dick had told Scotland Yard officers not to make the political gesture during protests.

Basu, who had once said that Muslims should not feel that they have to “assimilate” into British society, then claimed that “racial bias” was “built into the very fabric of our institutions and society” in the UK.

He then told officers to view the “legitimate anger” at BLM protests “with nuance and care”, saying that while some “behave badly” the majority are “showing solidarity with George and what his death represents. They have a point. We need to listen to our communities, and our people, and focus on what we in the UK can do better.”

Treating far-left protesters with “nuance and care” and even instances of London police taking a knee has not quelled violence against officers, however, with the dangers to London’s peacekeepers “seemingly escalating”.

The Metropolitan Police Federation’s Ken Marsh addressed Wednesday’s attack against two officers, saying: “Yet again this starkly shows the dangers [officers] face and the bravery they show each and every day keeping Londoners safe.

“We are not society’s punch bags. We have families we want to go home to at the end of every shift, but the dangers are stark and seemingly escalating.”