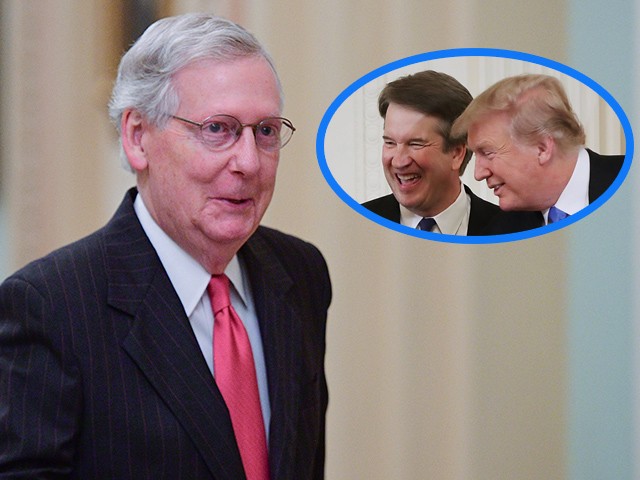 The Senate voted to pass its motion to cloture on Friday morning, with a vote tally of 51-49, featuring overwhelming Republican support.

Now that Senate passed its cloture motion, the final vote on confirmation will sometime on Saturday.

Sen. Joe Manchin (D-WV), a vulnerable Senate Democrat, voted yes on the motion to cloture and might signal that he might vote to confirm Kavanaugh to the Supreme Court.

Other vulnerable Senate Democrats such as Sens. Joe Donnelly (D-IN), Heidi Heitkamp (D-ND), Claire McCaskill (D-MO), and Bill Nelson (D-FL), were once thought to be potential votes to confirm Kavanaugh, but over the last couple of weeks, they said that they will vote against Kavanaugh.

On Kavanaugh, McConnell says “nothing could get Democrats to consider this nominee with an open mind.”

On the Senate floor, Senate Majority Leader Mitch McConnell (R-KY) said that “nothing could get Democrats to consider this nominee with an open mind.”

Senate Judiciary Committee ranking member Sen. Dianne Feinstein (D-CA) said that she opposes Kavanaugh because of his temperament. She said that Kavanaugh was a “man filled with anger and aggression” at last week’s Senate hearing.

On Senate floor, Ranking Democrat on Judiciary @SenFeinstein cites concerns about Kavanaugh’s temperament. Says he was “a man filled with anger and
aggression” at last week’s hearing. Says he displayed “a hostility and belligerance” unbecoming a SCOTUS nominee. pic.twitter.com/oqPYEf0LuA

Senate Minority Leader Chuck Schumer (D-NY) said that “We can salvage some decency here at the end,” by rejecting Kavanaugh for the Supreme Court.

.@SenSchumer: “We can salvage some decency here at the end.” https://t.co/7aA5RNJuH7 pic.twitter.com/v0nFiZGnWf

.@ChuckGrassley: “This should have been a respectable and dignified confirmation process.” pic.twitter.com/apfJaul2xR

President Donald Trump announced on Twitter he was “very proud” of the Senate’s cloture vote.

Very proud of the U.S. Senate for voting “YES” to advance the nomination of Judge Brett Kavanaugh!