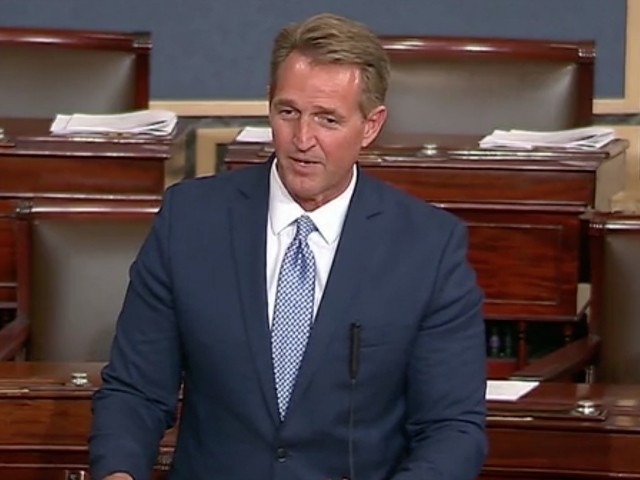 The Senate Judiciary Committee voted 11-10 Friday to recommend Judge Brett Kavanaugh to be the next associate justice of the U.S. Supreme Court, with Sen. Jeff Flake (R-AZ) making a last-minute stand that the final full-Senate vote be delayed for not more than one week.

Flake agreed to join with fellow Republicans Friday morning, only to retreat to the committee anteroom for nearly an hour to conference with Democrats before the vote. When he emerged for the vote, chairman Chuck Grassley (R-IA) allowed Flake to speak. Flake then announced he would vote yes on Kavanaugh for committee recommendation but with the stipulation that he would support another delay before the Senate floor vote that otherwise could have taken place as soon as Monday.

Flake was unequivocal that the delay, to allow additional investigation by the FBI, be limited to no longer than one week, meaning a final vote by next Friday. He also insisted the investigation be “limited in scope.”

The Justice Department has repeatedly characterized the FBI’s role as limited to investigating potential federal crimes, of which there are none in this case, and conducting background investigations to collect information on nominees, which has already been done, including with regard to Christine Blasey Ford’s allegations. The exact perimeters of a new investigation were not clear from Flake’s comments.

After a brief walk-out, Sens. Kamala Harris (D-CA) and Mazie Hirono (D-HI) reneged and voted against Kavanaugh with the rest of their Party.

The vote brings to close what could be the penultimate chapter in a chaotic, bitter, and polarizing confirmation process. After more than 30 hours of public testimony, hours more of closed-door hearings, and an excess of 1,200 written questions, Democrat senators and left-leaning news outlets made a national scandal out of a sexual misconduct allegation that ranking member Dianne Feinstein (D-CA) kept to herself for nearly two months.

Ford’s allegation, that a 17-year-old Kavanaugh groped her at a high school party more than 35 years ago, begat a series of additional allegations of increasing severity, culminating in a sworn affidavit by Michael Avenatti’s client, Julie Swetnick, that Kavanaugh helped arrange drug-induced gang rapes in the Washington, DC, area for years.

In one of the most closely watched Senate committee hearings in recent years, both Ford and Kavanaugh addressed the alleged incident in hours of testimony under oath, Ford adamantly standing by her allegation and Kavanaugh indignantly and categorically denying any such incident.

The chaos that has characterized Kavanaugh’s entire confirmation process returned briefly after the Judiciary Committee voted, with Democrats seizing on Flake’s speech to reiterate their call for additional investigation and Grassley abruptly adjourning the meeting after they had spoken their peace.