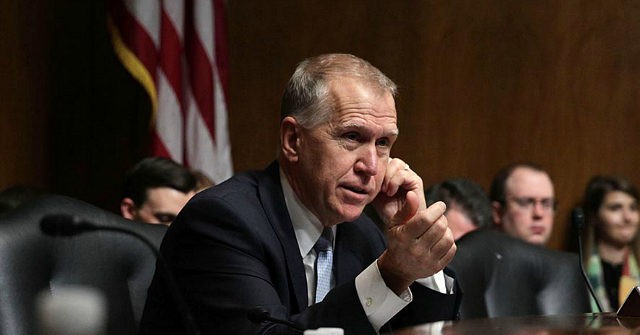 Sen. Thom Tillis (R-NC) became the second member of the Senate Judiciary Committee in the last 24 hours to announce he has contracted the Chinese coronavirus.

“Over the last few months, I’ve been routinely tested for COVID-19, including testing negative last Saturday, but tonight my rapid antigen test came back positive,” Tillis said in a statement. “I will be following the recommendations of my doctor and will be self-isolating at home for 10 days and notifying those I’ve been in close contact with. Thankfully, I have no symptoms and I feel well. As we all know, COVID-19 is a very contagious and deadly virus, especially because many carriers are asymptomatic.

The North Carolina Republican added: “I encourage all North Carolinians to follow the recommendations of medical experts, including wearing a mask, washing hands, and practicing social distancing. For any North Carolinian who believes they were exposed to the virus or starts to display symptoms, please call your doctor, self-isolate, and get tested to protect those around you.”
Tillis’ announcement comes hours after Sen. Mike Lee (R-UT) revealed he tested positive for the virus and would isolate for 10 days. Both senators attended last Saturday’s Supreme Court nomination event for Amy Coney Barrett at the White House.

“Unlike the test I took just a few days ago while visiting the White House, yesterday’s test came back positive. On advice of the Senate attending physician, I will remain isolated for the next 10 days,” Lee said in a statement.

President Donald Trump was transported to Walter Reed hospital in Maryland on Friday, less than a day after he tested positive for COVID-19, the White House announced.

Marine One arrived on the South Lawn of the White House around 5:20 p.m. and left with the president about 1 hour later. Trump walked to the helicopter under his own power.

“Out of an abundance of caution, and act the recommendation of his physician and medical experts, the president will be working from the presidential offices at Walter Reed for the next few days,” she said in a statement.

Earlier Friday, Trump’s physician, Dr. Sean Conley, said he was treated with Regeneron, an experimental antibody treatment. He described the president as being in “good spirits,” and said first lady Melania Trump, who also tested positive, had a mild cough and headache.