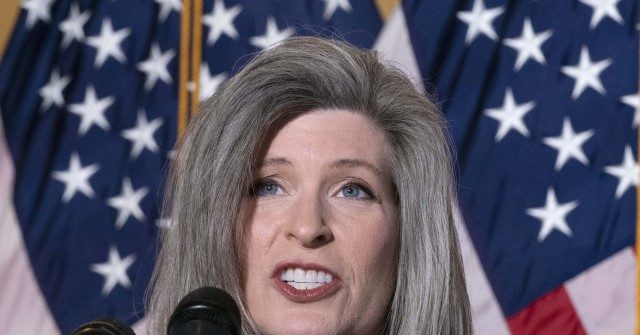 Liberal policies are fueling the rise in crime, declared Sen. Joni Ernst (R-IA), who blasted the Biden administration for refusing to enforce the law as crime surges throughout the country and warned, “If they don’t take care of it, we will step up and do so,” as she presented her new effort to curtail crime.

“We are seeing a significant rise in crime and violent crime across the United States and this is because of this administration’s lack of wherewithal in enforcing law and order,” she said.

“We see it with liberal district attorneys,” she added, blaming “progressive policies out there that actually make it a crime to punish the crime.”

Liberal policies and lenient district attorneys are fueling a rise in crime.

The Biden administration needs to step up, support our men and women in blue, and enforce our laws. pic.twitter.com/uOvpKuDrG8

“There’s a Democratic DA in Los Angeles that banned bail and prohibited prosecuting the most serious crimes to the full extent of the law,” she said.

“There was also a Democratic DA in New York that released a list of crimes that would not be prosecuted, including resisting arrest,” she added.

Claiming that Americans are “really concerned” about these matters, she emphasized the need to “act accordingly” by showing support for “the men and women in law enforcement.”

“Stop this ridiculous defund the police movement!” she exclaimed.

In addition to being supportive of law enforcement, she made a call to action: “Let’s also step up and enforce the crimes that are being committed. Let’s make sure that those are being prosecuted.”

She then presented her new bill, the Holding Violent Criminals and Child Predators Accountable Act of 2022, which aims at increasing penalties on “the most serious offenses” and ensuring child predators and those engaged in violent crime “are prosecuted and held to the fullest extent of the law.”

“I think these are all things that Republicans can get on board with,” she said. “Now I’m asking that the administration step it up.”

Warning that “our communities are in danger,” Ernst explained that it is “not just the largest metro areas” facing increases in crime.

“If they’re not controlling crime in the metro areas, that literally bleeds over into our rural areas,” she said, before warning that action would need to be taken if the situation is not dealt with.

“If they don’t take care of it, we will step up and do so,” she concluded.

Ernst’s proposed bill calls for protecting children from sexual abuse by significantly punishing child pornographers and increasing the statutory maximum penalty to “life imprisonment for sexual abuse of a minor, sexual abuse of a ward, and sexual contact with a child 12 years of age or under.”

It also establishes increased penalties for those convicted of interstate domestic violence resulting in life-threatening or serious bodily injury to a victim.

Her effort and remarks come as crime has surged nationwide after progressives campaigned endlessly against police, leading to eroded confidence in law enforcement, sunken police morale, and an officer exodus.

More police officers were intentionally killed in the line of duty in the year since President Biden became president than in any other year since 1995, according to an FBI database.

In addition, at least 16 major U.S. cities — the vast majority of which are Democrat-run — have broken annual homicide records this past year.

In June, in the wake of a continuing crime wave across America’s big cities, nearly half of voters expressed their belief that anti-police protests hurt public safety.