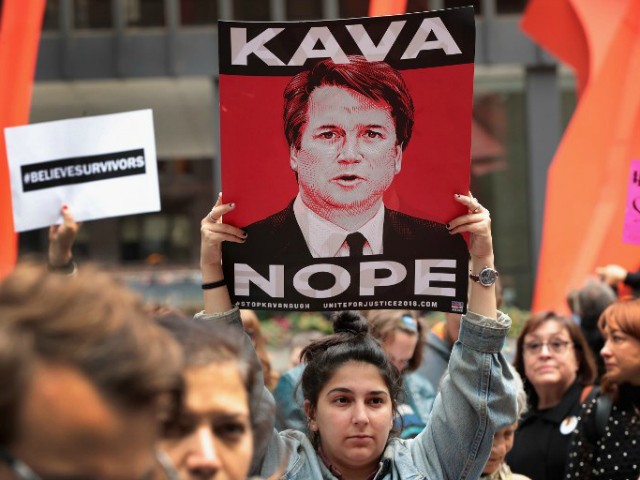 Sen. David Perdue (D-GA) said on Wednesday that Republicans should not put up with the harassment and intimidation of left-wing protesters who have descended on Capitol Hill to protest President Donald Trump’s Supreme Court nominee, Brett Kavanaugh, after Christine Blasey Ford accused him of sexually assaulting her decades ago at a high school party.

“These are not genuine people who are concerned about Dr. Ford or anything else. These are paid activists,” Perdue said on The Laura Ingraham Show. “This is a George Soros conspiracy, and it’s time we wake up, expose them, stand up, and fight for our country because that’s what’s at stake here.”

“It’s time for Republicans to stop being the minority party, grow up and stop playing defense,” Perdue said. “This is the time right now.”

Anti-Kavanaugh protesters harassed Sen. Perdue and his wife at Reagan National Airport on Monday — one in a series of confrontations between activists and lawmakers. The Senate Judiciary Committee delayed a vote on Kavanaugh’s confirmation to allow Ford to testify, then further delayed it to let the FBI conduct supplemental background checks on Kavanaugh and others named in her claims.

One of Perdue’s confronters at the airport was Arizona State Representative Isela Blanc, a Democrat. She and two other protesters are affiliated with The Center for Popular Democracy, funded by left-wing billionaire George Soros.

The increasingly aggressive and angry protests have resulted in heightened security around Capitol Hill, including Capitol Police escorts for lawmakers on the Judiciary Committee.

“Republicans had better not be asleep because these people are mobilized, they’re funded, and, quite frankly, this is just the tip of the spear of all of their malign activity,” Perdue said.

Perdue cited Democrats encouraging intimidation against political opponents in recent months, including Sen. Cory Booker (D-NJ) telling Kavanaugh opponents to “get up in the face of some Congresspeople” and Rep. Maxine Waters (D-CA) telling her constituents to confront Trump administration officials at restaurants, gas stations, and department stores and to “push back on them.”

Perdue also slammed Democrats for continuing their intimidation agenda during Kavanaugh’s 30-plus hours of confirmation hearings.

“I’m disgusted with the process this week,” Perdue said. “This level of character assassination, I didn’t think we’d see again in my lifetime.”

And Perdue warned that the Democrats’ tactics would not change going forward.

“This is part of a bigger attempt by the Democrats to take this to a new level,” Perdue said. “This is a bigger issue, and it’s not going to go away when we confirm Kavanaugh this week.”