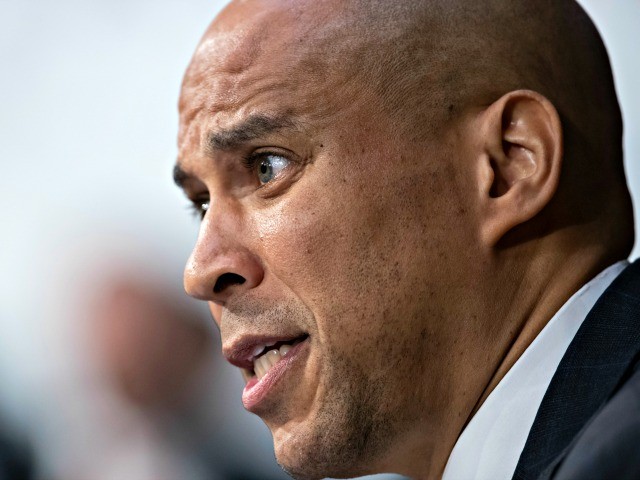 A Star-Ledger columnist has revisited a piece written by New Jersey Sen. Cory Booker, in which he admitted to “groping” a female friend at age 15.

On Thursday, Paul Mulshine asked, “Guess who wrote the following”:

New Year’s Eve 1984 I will never forget. I was 15. As the ball dropped, I leaned over to hug a friend and she met me instead with an overwhelming kiss. As we fumbled upon the bed, I remember debating my next ‘move’ as if it were a chess game. With the “Top Gun” slogan ringing in my head, I slowly reached for her breast. After having my hand pushed away once, I reached my “mark.”

Our groping ended soon and while no “relationship” ensued, a friendship did. You see, the next week in school she told me that she was drunk that night and didn’t really know what she was doing.

Mulshine had cited a portion of a piece written in 1992 by – as he calls him – “our junior U.S. Senator, Cory ‘Spartacus’ Booker,” when the senator was a student at Stanford University.

The column, titled “So Much for Stealing Second,” was apparently written by Booker to highlight his conversion from a 15-year-old who was “trotting around the bases and stealing second” to a “sensitive man” who came to understand women as victims of men’s sexual “power plays.”

In his piece, Booker proudly boasted that his transformation was so stark, one college friend even referred to him as a “man-hater.”

In a second column, cited by Fox News, in which Booker referred to “date rape,” he admitted, “With this issue as with so many others, a dash of sincere introspection has revealed to me a dangerous gap — a gap between my beliefs and my actions.”

Booker’s writings have drawn criticism, as they have circulated once again, since he is considered to be a potential 2020 presidential contender.

“But that column puts the senator in an awkward position regarding the allegations against Supreme Court nominee Brett Kavanaugh by psychologist Christine Blasey Ford,” Mulshine pointed out as well.

Now-Sen. Booker has called for a delay in the vote to confirm Kavanaugh, in light of Ford’s accusation of sexual misconduct against the nominee – which Kavanaugh denies – over 35 years ago.

“It takes enormous courage to come forward publicly as Ms. Ford has,” Booker said. “The Senate owes it to her and every survivor of sexual trauma to listen to her story and gather all of the facts before moving forward with this nomination.”

The New Jersey Democrat also said Ford’s accusations against Kavanaugh are “serious, credible, and deeply troubling,” and called for an FBI investigation into the allegations.

“But based on that Stanford Daily column, Booker should be giving Kavanaugh the benefit of the doubt as well,” Mulshine asserted. “The point of it was that the future senator had ‘a wake-up call’ and decided ‘I will never be the same.’”

Fox News reported that Booker’s office denied he is guilty of any hypocrisy, and painted the senator as a victim of a “right-wing attack.”

“This disingenuous right-wing attack, which has circulated online and in partisan outlets for the past five years, rings hollow to anyone who reads the entirety of Senator Booker’s Stanford Daily column,” Booker’s spokesperson said in a statement.

“The column is in fact a direct criticism of a culture that encourages young men to take advantage of women – written at a time when so candidly discussing these issues was rare – and speaks to the impact Senator Booker’s experience working to help rape and sexual assault survivors as a college peer counselor had on him,” the spokesperson added.