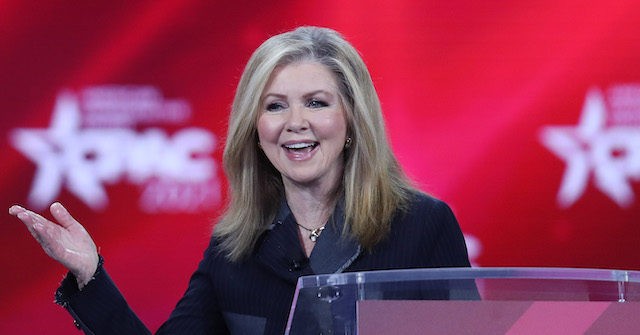 Sen. Marsha Blackburn (R-TN) is offering an alternative to President Biden’s multi-trillion dollar American Jobs Plan, which he casts as an “infrastructure” proposal, hoping to demonstrate that it is possible to improve the country’s infrastructure “without implementing the largest tax hike in nearly three decades or adding $2 trillion to our federal deficit.”

Blackburn, alongside Sen. Cindy Hyde-Smith (R-MS) and Rep. David Kustoff (R-TN), is promoting the “Paving the Way for Rural Communities Act of 2021,” which she says will improve the nation’s infrastructure without enacting the massive tax hikes required to make Biden’s vision a reality. The proposed legislation will “make it easier to repair America’s roads and bridges by removing burdensome government regulations that are adversely targeted towards rural areas,” per the press release.

It identifies federal laws, including the National Environmental Policy Act, the National Historic Preservation Act, and the Endangered Species Act, as adding “enormous cost and complexity to communities trying to work with federal agencies on highway construction or economic development projects”:

Blackburn explained in a statement that “not even six percent of President Joe Biden’s massive $2 trillion ‘infrastructure’ bill would be used to build roads and bridges.” Rather, it includes what she described as the largest tax hike in nearly three decades or another “Trojan horse for the radical left.”

“While America’s roads and bridges need repair, especially in rural areas, there are countless ways to fix this without harming working families,” she said, casting the “Paving the Way for Rural Communities Act of 2021” as a “tax-free alternative that will strengthen our nation’s infrastructure and remove regulations that prevent rural counties from fixing their roads.”

Hyde-Smith agreed, noting that their proposal would remove regulations to better allow rural communities to compete for federal resources.

According to one report, just $650 billion of Biden’s $2.25 trillion “infrastructure” bill will go toward funding for roads and bridges, specifically.

Other agenda items in the bill include roughly $400 billion in “clean-energy credits” to promote “green” energy, $300 billion for housing, and $300 billion to revive U.S. manufacturing.