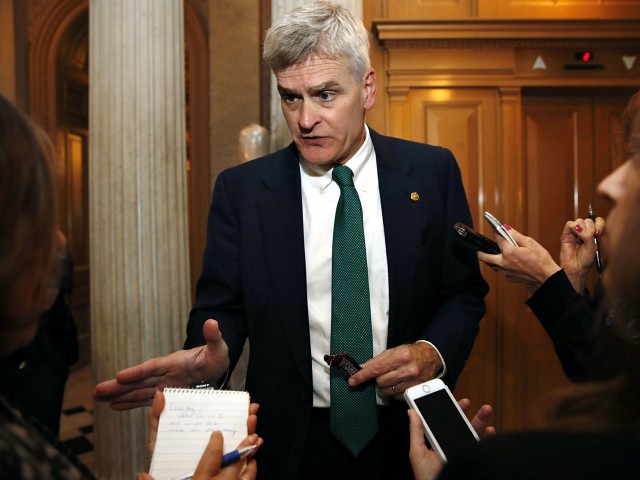 Louisiana Sen. Bill Cassidy (R) chastised a left-wing activist who demanded that he apologize directly to her children for ruining their lives with his vote to confirm Brett Kavanaugh to the Supreme Court.

Alethea Torrellas Shapiro had been using her children regularly to harass senators, such as Sen. Bill Cassidy, on Capitol Hill. According to the Daily Caller, Shapiro is “an activist who calls extremist feminist activist Linda Sarsour her hero and regularly goes on profanity-laced tirades against GOP senators like Chuck Grassley.”

Protester demands that GOP Senator @BillCassidy “apologize to my children for ruining their futures.”

Cassidy looks at the kids: “Guess what? Your parents are using you as tools. In the future if somebody makes an allegation against you & there’s no proof for it, you’ll be OK.” pic.twitter.com/y6WKtPhpYO

However, when Shapiro confronted Cassidy in a Senate office building, he chastised her for using her children as political props.

“Sen. Cassidy, can you please apologize to my children for ruining their futures?” Shapiro demanded of him.

Cassidy, however, turned to Shapiro’s children and said, “Hey, guess what … I know your parents are using you as tools.”

“But in the future,” Cassidy continued to speak to the children, “if somebody makes an allegation against you, and there’s no proof for it, you will be OK. Thank you.”

As the senator walked away, Shapiro shouted after him, “Shame on you for not believing women and for ruining my daughters’ lives!”

Sen. Bill Cassidy has not hesitated to respond to such confrontations by turning the taunts back on the activists themselves.

As the Daily Caller noted, another protester confronted the senator earlier during the Kavanaugh hearings:

She asked, “Why are you supporting Kavanaugh?” to the brisk-walking senator. Cassidy took the chance to push back, asking her if she would like it if her loved ones were “destroyed” by “uncorroborated” charges.

Cassidy: “Why wouldn’t I support Kavanaugh?”

Protester: “Because rapists are bad.”

Cassidy: “Wait a second — everybody there said that it did not happen. So why am I going to–”

Protester: “So you’re going to believe Mark Judge over a woman?”

Cassidy: “No, I’m going to believe her best friend.”

Cassidy: “She said she didn’t remember.”

Protester: “So you’re OK as a doctor to harm a woman?”

Cassidy: “Wait a second – are you OK as a person to go ahead and to accept a non-corroborated charge to destroy someone’s life? If it destroyed your life, your son’s life, or your husband’s? Wait a second, answer my question. If it was your husband, your son, your father, whose life has been destroyed by uncorroborated, would you like that?”

Protester: “I would support a full FBI investigation.”

Cassidy: “No, no. Would you like that? An uncorroborated charge, destroying—”

Protester: “I wouldn’t marry somebody that was a drunk.”

Cassidy: “Oh no, wait a second. Uncorroborated. Answer the question. I don’t think you’re able to. Because you know it’s unfair.”

Protester: “I would stand up.”

Protester: “I would fight. And I would make sure women are heard. Clearly you’re OK if a rapist goes on the Supreme Court.”

Cassidy: “No, I’m not. But then on the other hand, clearly you’re OK, the absence of evidence obviously means nothing to you.”

Protester: “No, there is evidence. Look at the standard. How many people are in jail for less?”