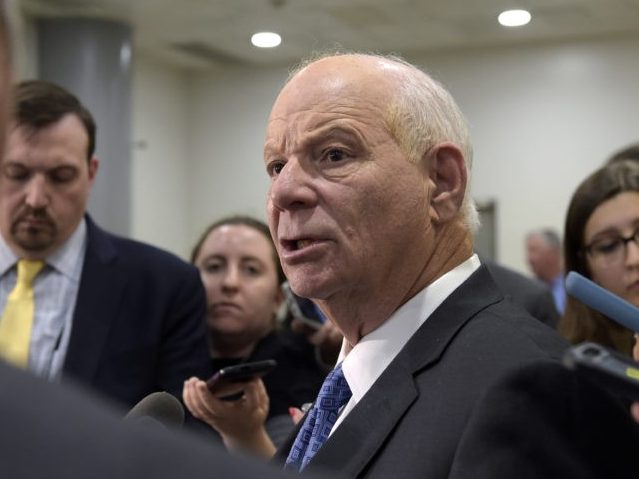 Sen. Ben Cardin (D-MD) claimed during an interview with CNN New Day on Monday that the Trump administration’s immigration policies are to blame for caravan migrants storming the San Ysidro Port of Entry in San Diego Sunday.

JOHN BERMAN: I want to show you if I can or talk about the pictures we’ve seen over the last 24 hours at the southern U.S. border with Mexico and Tijuana, where some 500 migrants from Central America ran toward the border. There was tear gas used to push them back. Tear gas, some people note, on woman and children. What do you see here?

SEN. BEN CARDIN: This is horrible. We have a humanitarian problem on our border. President Trump has argued that our immigration system needs to be fixed. Yet, for the last two years under his presidency, controlling both the House and the Senate, the Republicans, they have not taken any action to improve our immigration system. Instead, they’ve put all there weight behind building a $28-billion wall that the experts tell us will do very little protect our security at the border. You have people who are fleeing horrible circumstances in their own country.

Many fear for their own lives. They have legitimate concerns about their safety. They want to seek asylum in the United States. There is a process that needs to be followed for that. The Trump administration is not following those guidelines. They are making the circumstances worse. Here we look at children being subjected to tear gas. That’s the United States causing that. That’s outrageous.

BERMAN: That’s the United States causing that? I think that other people will look at that and say “these are 500 migrants who broke the law by rushing the border, by storming that wall there.” Don’t they have responsibility?

BERMAN: But again, you say President Trump has caused this. Those migrants, some 5000 migrants, many of them at a stadium, they’re the ones who chose to march up from Central America. They’re waiting at a stadium right now. Those 500 migrants chose to rush the border. What is the right response if you have hundreds of people running to the border?