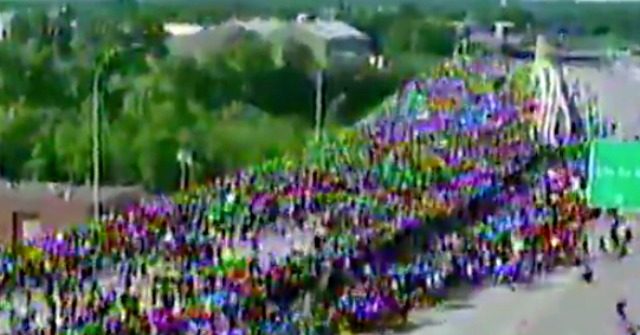 A semi-truck drove into a crowd marching to protest the death of George Floyd on a portion of I-35 that had been closed off earlier in the day in Minneapolis, Minnesota, late Sunday afternoon.

KSTP TV was broadcasting a live overhead view of the bridge on I-35 where thousands of protesters were marching at 5:46 p.m. central time when the crowd began to separate rapidly.

Within seconds, the semi truck could be seen driving into the crowd before slowing to a stop at a mid-point of the bridge. As the truck stopped, the vehicle was swarmed by protesters.

You can watch the video of those moments here, as reported by KSTP.

“We are looking at the people there, thousands on the ground,” the male announcer on KSTP can be heard saying at 5:46 p.m. central time as the camera shows the crowd walking on I-35.

“They seem to be dispersing right now,” the female announcer interrupted.

” Oh wow, they’re moving across, what’s going on? Oh my gosh,” the male announcer said, as the moving semi-truck came into the picture among the protesters.

“A giant…. this is very dangerous,” the female announcer said.

“Oh my gosh. Oh this is bad,” the male announcer said, as the semi-truck came to a stop and was swarmed by protesters and several opened the vehicle’s passenger side door.

“I’m not sure how that vehicle made its way through this crowd. It’s being surrounded now,” the female announcer said.

The driver was arrested with non-life threatening injuries. No one in the crowd was injured.

The Minnesota Department of Public Safety tweeted the details of the incident out at 6:35 p.m central time:

Very disturbing actions by a truck driver on I-35W, inciting a crowd of peaceful demonstrators. The truck driver was injured & taken to a hospital with non-life threatening injuries. He is under arrest. It doesn’t appear any protesters were hit by the truck. #MACCMN

“I don’t know the motives of the driver at this time,” Gov. Tim Walz said of the incident at 7:01 p.m. central time Sunday during a press conference.