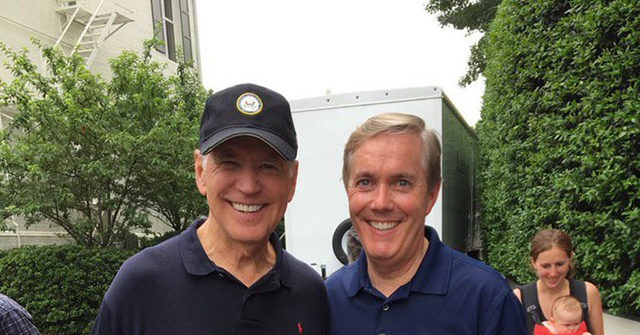 After sparring with a hostile Fox News anchor, Chris Wallace, during the first presidential debate this week, President Donald Trump will next go toe-to-toe with a former Joe Biden intern, C-SPAN’s Steve Scully.

When Scully spoke at Utah Valley University in 2010, this is how a biography described him:

Before coming to C-SPAN, Steve covered business, politics, and local government as a reporter and anchor at WHEC-TV (NBC Affiliate) in Rochester, NY, Prior to that, he was an anchor and reporter at WSEE-TV in Erie, PA, and WHBF-TV (CBS Affiliates) in Rock Island, IL. Steve taught several courses on the media & politics at St. John Fisher College & Nazareth College in Rochester, NY, between 1988-90.   While attending college, he served as an intern in the office of Delaware Sen. Joseph R. Biden [D], and later a staff assistant in Sen. Edward M. Kennedy’s [D-MA] media affairs office. (emphasis added)

“I came to school in Washington, D.C., went to American University and had a couple of internships. I worked for Joe Biden, Senator from Delaware at the time, as an intern, so I had my first chance to really see politics up close in Washington, D.C.,” Scully said in 2011, Marie Claire reported.

Scully was all smiles when he attended a party at Biden’s house in 2016:

Gotta love the @VP at the Biden Beach Bash ’16 pic.twitter.com/Z9gdC6Cmi1

Breitbart News asked the Commission on President Debates if Scully’s past work for Biden will be disclosed on-air prior to the event on October 15 at the Adrienne Arsht Center for the Performing Arts in Miami.

The Commission has not yet responded.