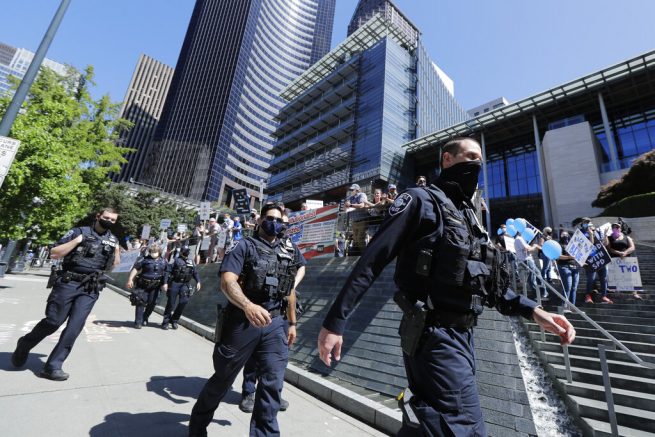 FILE – In this Wednesday, July 15, 2020, file photo, Seattle Police officers walk past people holding signs and flags during a rally in support of police and other law enforcement officers, in front of City Hall in Seattle. (AP Photo/Ted S. Warren, File)

The situation remains tense between Washington State police and residents as protests continue across the state.

The Seattle Police Department clashed with protesters on Saturday while breaking up a demonstration that turned violent. 16 people were arrested for destruction of property, assault and failure to disperse.

Protesters gathered earlier that day and were mostly quiet before a group left Cal Anderson Park that evening and began marching. According to police, some people started vandalizing buildings and property by shattering windows and spraying graffiti.

.@SeattlePD moves in on Antifa militants as they form a shielded line. I have counted 9 orders to disperse. #seattleprotests pic.twitter.com/sxe4xOwqrK

Police said people then threw explosive devices inside the buildings and at officers, prompting them to issue a dispersal order and make arrests.

Seattle has seen a number of protests in recent weeks condemning police for their handling of demonstrations. This all came after city officials rejected claims that police have violated court orders by using anti-riot munitions to disperse violent crowds.