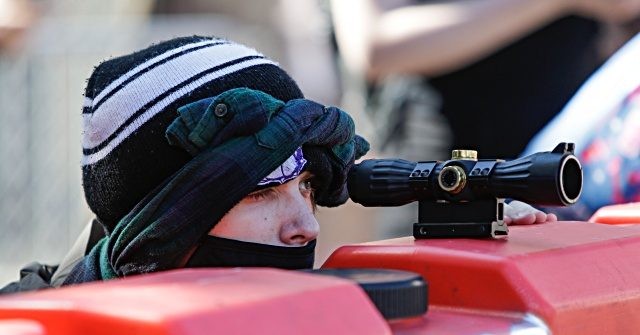 Seattle, Washington’s Capitol Hill Autonomous Zone (CHAZ) has a quasi-Border Patrol to control its perimeters and seemingly conducts deportations without due process.

CHAZ — a six-square block autonomous zone formed by anarchists, Antifa members, and Black Lives Matter activists — has its own quasi-Border Patrol. Organizers said the armed guards have their weapons concealed and are there to defend CHAZ’s borders.

However, while organizers confirmed there are some armed guards at the CHAZ entrances, the weapons are not visible. [Emphasis added]

“It’s not our intent to try to create any paradox to try to incite violence or have that be a motif,” said demonstrator Maurice Cola. “We’re not trying to use our guns to flash around — it’s for defense.” [Emphasis added]

Cola said that people are welcome to come and go freely, without being stopped; the guns are only to guard against violent white supremacist groups. [Emphasis added]

Like its border controls, CHAZ is surrounded by a border wall via vehicle barriers as well as random fencing, as Breitbart News reported.

Opposite the United States’ deportation policy, though, occupants of CHAZ can be seemingly removed by a mob without any due process. Last week, a man said he was deported from CHAZ for being pro-life. The man was chased out of the autonomous zone by a mob taunting him.

Occupiers forced this guy out who was live-streaming inside the zone. The crowd was calling him a white supremacist, though the man being pushed out says he’s simply an anti-abortion advocate. The crowd chanted, “Who don’t matter? This motherfucker!” pic.twitter.com/qCBl1K7G90

The second known deportation from CHAZ involved a man whom onlookers said was chased out by a mob following a fight. A third deportation was seemingly conducted when a Christian street preacher was beaten up and dragged out of CHAZ after he said he expressed his religious beliefs.

An angry protester demanded we not record fighting incidents. Said if it gets out onto the internet, it might give CHAZ a bad name (@Julio_Rosas11)

This was a mix of protesters trying to keep the peace as others chased a man out after another fight: pic.twitter.com/6DyTxjSyjU

Unlike CHAZ, foreign nationals can only be removed from the U.S. if they have committed criminal acts, have entered illegally, are a threat to public safety, or if they have violated their visa.

U.S. deportation policy allows foreign nationals due process under the law, giving them the ability to appeal an order for removal or file a complaint with the Department of Homeland Security (DHS).