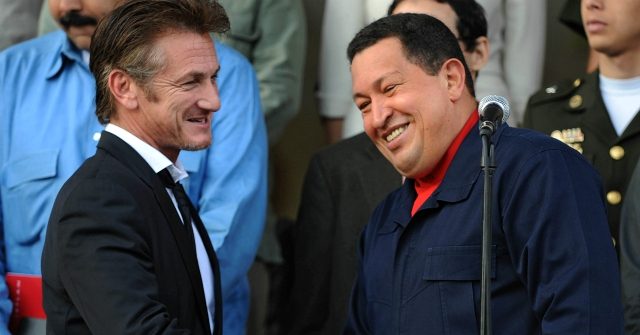 Actor Sean Penn, who has been pictured hobnobbing with Cuba’s communist dictator Raul Castro, dictator and former president of Venezuela Hugo Chavez, and Russian president Vladimir Putin, went on the attack against Republicans again, calling its leaders “the party of Putin.”

“Republican leaders have given themselves a lot of slack as they’ve fallen into the ‘party of Trump,’” Penn tweeted to his 750,000 followers, offering no evidence for his claims. “The reality is that they are the party of Putin. Trump is just the brand. He’s the salesman, the vessel, who sold them prurience as patriotism.

Republican leaders have given themselves a lot of slack as they’ve fallen into the “party of Trump.” The reality is that they are the party of Putin. Trump is just the brand. He’s the salesman, the vessel, who sold them prurience as patriotism.

The irony of Penn’s proclamation is that he was seen hanging with Putin, along with actor Jack Nicholson, in a photo snapped in 2001.

Vladimir Putin, Jack Nicholson and Sean Penn with Bob Van Ronkel at a surprise party organised by the president of the Moscow International Film Festival festival, Nikita Mikhalhov, at his country home. Penn and Nicholson were in Russia for a screening of The Pledge in 2001. pic.twitter.com/bszT5ZdU1G

Throughout the late 2000s, Penn was a repeat visitor to the luxurious home of Venezuela’s socialist dictator, Hugo Chavez. Indeed, Penn praised the man who destroyed one of Latin America’s richest nations so much that he wrote a gushing tribute to Chavez when the dictator passed away in 2013. Penn lauded Chavez for years, in one instance even calling him an “inspiration.”

Sean Penn says Trump is the “enemy of compassion.”

This is the same Sean Penn who doesn’t believe in free speech, and once said that journalists should go to prison for calling Hugo Chavez a dictator. pic.twitter.com/jR4b4SdSG2

There was also the incident when Penn caused consternation among law enforcement officials of both Mexico and the U.S.A. by arranging to meet with violent drug kingpin El Chapo Guzman for a glowing interview.

Finally, the Democrats and their many investigations have found no evidence whatsoever that Trump worked with Russia and Vladimir Putin during the 2016 election. Even after spending $32 million in taxpayer dollars, special counsel Robert Mueller found no evidence of collusion.