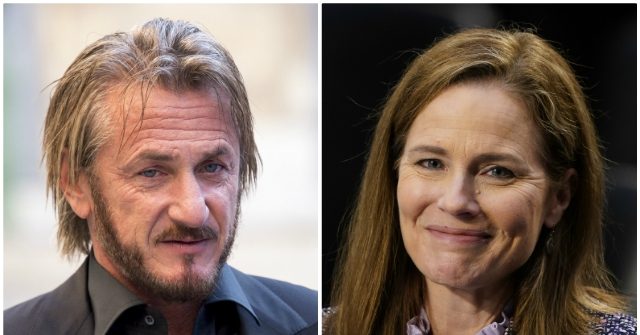 Even as he attacks Judge Barrett’s integrity and character, Sean Penn himself has a very long criminal history. His record is filled with drunk driving charges, drug abuse, domestic violence, abusive behavior toward strangers, film set abuse of co-workers, and not to mention his penchant for cruising through third world nations and giving support to dictators.

1. The Milk star was also arrested in Tennessee in 1985 on charges of attacking two British citizens

2. Penn was even charged with attempted murder in 1986 after trying to push a man off a balcony in Macau.

4. Around that same time, Penn beat movie extra Jeffrey Klein to near unconsciousness on the set of the movie Colors.

6. In 2010, Penn was charged with battery and vandalism for attacking a photographer in Los Angeles.

Is it may have raised eyebrows when the I Am Sam star insisted that if Judge Barrett had any integrity, she would withdraw her name from contention. “The leading edge of Judge Coney Barrett’s character is on display as her ambitions outweigh her integrity,” the 60-year-old actor tweeted on Thursday. “Integrity would recognize this late-term abortion on our court, and a judge of character would withdraw until after the election.”

The leading edge of Judge Coney Barrett’s character is on display as her ambitions outweigh her integrity. Integrity would recognize this late term abortion on our court and a judge of character would withdraw until after the election.

Sean Penn’s criminal record aside, there’s also his habit of supporting and piling around with brutal dictators.

For instance, in 2016, Penn skirted authorities on both sides of the border and met with Mexican drug kingpin El Chapo Guzman for a glowing interview. Penn also flew to Venezuela to meet with socialist dictator Hugo Chavez, a leader Penn called an “inspiration.” Penn has also been chummy with Cuba’s communist dictator, Raul Castro.

Meanwhile, Amy Coney Barrett earned glowing praise from former classmates, students, and colleagues from both sides of the aisle, and was given a “well qualified” rating by the American Bar Association.