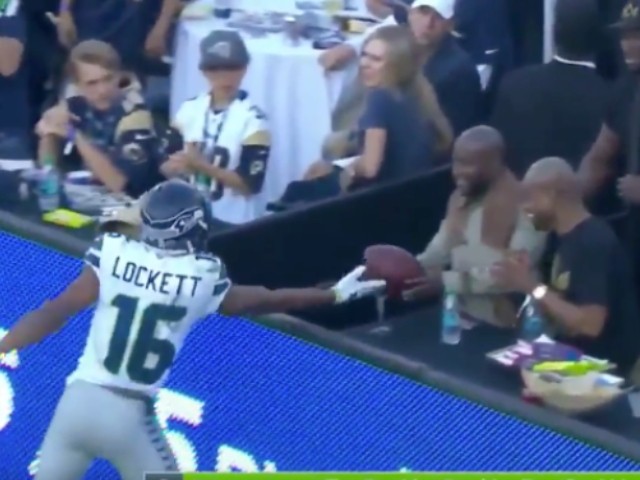 Some fans took the team to task for honoring Mayweather because the boxing champ has been accused of abusing women, Fox News reported.

The photo occurred after Lockett scored a third quarter touchdown on a 23-yard pass by Seahawks QB Russell Wilson. After his feat, Lockett ran to the sidelines and gave the ball to the Welterweight champ sitting there. The Seahawks tweeted out the image with the caption “money.”

But almost immediately fans began replying to the tweet slamming the team for honoring the boxer.

“Why would you promote this after how he’s openly treated women?” another wrote. “Not impressed,” another said.

Another sarcastically wrote, “He is a known domestic abuser, has spent time in jail on multiple occasions for abusing women. So this is super cool.”

One fan even slammed the team as being a bad representative of Seattle saying, “You represent our city – pls take this down.”

Then there were those who thought the ball should at least have gone to a fan instead of some famous visitor to the stadium: “I honestly don’t care who he gives the ball to it’s his choice not mine, but I personally would rather see him give it to a fan.”

The Seahawks’ opponents, the L.A. Rams, also gave a game ball to Mayweather that night. But the Rams did not make the mistake of celebrating the event on the team’s Twitter account.