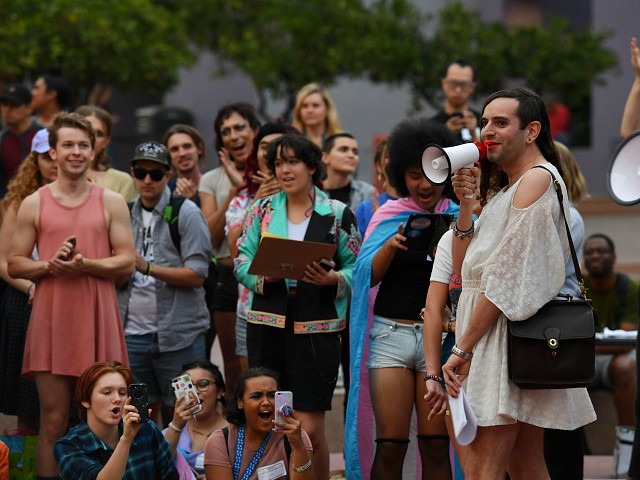 Political discrimination against the nation’s tiny percentage of transgender people is a “worse” threat than political curbs on scientists’ freedoms, says a top-ranked science journal.

The science journal’s focus on protecting the social status of a small minority outside of science, instead of protecting scientists’ freedom from a supposed political threat, spotlights the increasing power of the transgender ideology in science and academia.

The editors of Nature posted their editorial in the journal’s October 30 issue to oppose a pending proposal by President Donald Trump’s administration that would use biology to gauge the sex of people involved in disputes over sex-discrimination laws.

The proposal — on which HHS officials have refused to comment — is a terrible idea that should be killed off. It has no foundation in science and would undo decades of progress on understanding sex — a classification based on internal and external bodily characteristics — and gender, a social construct related to biological differences but also rooted in culture, societal norms and individual behaviour. Worse, it would undermine efforts to reduce discrimination against transgender people and those who do not fall into the binary categories of male or female.

Since its gradual emergence from Christian Europe, science has dramatically raised people’s health, wealth, living standards, and freedoms. Transgenderism, however, has had a more modest role since its invention in the 1950s by political advocates.

The journal’s top editors  — Magdalena Skipper, Ritu Dhand, and Helen Pearson — approved the editorial which admits that more than 99 percent of people are clearly female or male. But the federal government must reject the straightforward sex-is-biology rule because fewer than one percent of people have health conditions which include genetic or physical features from both sexes, says the editorial:

Biology is not as straightforward as the proposal suggests. By some estimates, as many as one in 100 people have differences or disorders of sex development, such as hormonal conditions, genetic changes or anatomical ambiguities, some of which mean that their genitalia cannot clearly be classified as male or female.

The Nature editorial was slammed by scientists who are worried that progressives will warp science:

To say “this proposal has no foundation in science” is nonsense.

The genitals one is born with show overwhelming correlation with one’s self-assessed gender, as predicted by evolutionary theory.

If we grant Nature’s claim, we condemn the study of complex phenomena to a dark age https://t.co/I3gPra3lYa

But that danger has already impacted science teachers, says James Lindsay, a liberal who also argues that science should not be distorted by political demands.

From my email box: An evolutionary biologist talking about how the threat to their profession has shifted from evangelical Christian creationists to militant trans/gender activists. The Social Justice Left culture in academia makes this problem far more insidious, however. pic.twitter.com/jfooFIJ2Qt

The medical industry is also embracing the gender ideology, despite scientific ignorance about the risks of providing sex-related advocacy, drugs, and surgery to children and youths.

In November, the American Medical Association’s “House of Delegates” declared it would “oppose efforts to deny an individual’s right to determine their stated sex marker or gender identity.” The AMA include doctors who promote and sell transgender-related services, and their  delegates “work in a democratic process to create a national physician consensus on emerging issues in public health, science, ethics, business and government to continually provide safer, higher quality and more efficient care for patients and communities.”

So far, neither science groups nor the establishment media have pushed back against the demand by progressives and business groups that the “gender identity” feelings of less than one percent should legally be more important than the biological reality of more than 99 percent.

This silence spotlights the increasing political clout of the transgender movement, which insists that the federal government force Americans to define a person’s sex by their feelings of “gender identity” instead of by their unchangeable biology.

The revolutionary ambition of that demand was sketched in a 2014 sermon from Attorney General Eric Holder, who told an audience in Sweden that:

Our Civil Rights Division is fighting to … safeguard those who are targeted just because of their sexual orientation or gender identity [because] every human being is, and must be, free and equal in both dignity and rights. Neither tradition nor fear of change can absolve us of the obligation we share: to identify and eradicate discrimination in all its forms … As we continue to move forward, we will undoubtedly encounter resistance and opposition both at home and around the world.

Trump’s deputies have reversed much of Obama’s pro-transgender policies, which would have reached into many corners of society. For example, Obama’s education policy would have forced high school biology teachers to use opposite-sex pronouns when addressing children who had declared themselves to be “transgender”:

In November 2018, 98 Democratic members of Congress declared that it is “cruel and unscientific” to define a person’s legal sex by their biology. Trump’s biology-determines-sex policy “makes it clear that members of this administration are willing to … solidify an archaic, dogmatic, and alarming view of the world,” the 98 Democrats complain their letter to the Department of Health and Human Services.

The Democrats’ statement was sent to the agency after the New York Times reported that the administration would formally clarify that the sex of people involved in sex-discrimination legal fights will be based on their male or female body.

On November 19, a group of 20 Democratic Attornies General declared:

[We] write to express our deep concern over recent reports that your Departments are contemplating adopting a narrow definition of “sex” that would have the purpose and effect of excluding transgender and gender nonconforming people from the protections of critical federal civil rights laws like Title IX and the nondiscrimination provisions of the Affordable Care Act.

Defining “sex” as an immutable, binary biological trait determined by or before birth is inconsistent with current medical consensus. The American Medical Association, for example, recognizes that “gender is ‘incompletely understood as a binary selection’ because gender, gender identity, sexual orientation, and genotypic and phenotypic sex are not always aligned”…

The full inclusion of all people, regardless of gender identity or expression, makes our communities stronger and more vibrant. Transgender people deserve and need the same civil rights protections as everyone else. #WontBeErased #TransAwarenessWeekhttps://t.co/49yVWqWn6e

The transgender ideology is deeply unpopular, especially among women and parents.

In 2017, Obama told NPR that his promotion of the transgender ideology made it easier for Donald Trump to win the presidency. Multiple polls show that most Americans wish to help and comfort people who think they are a member of the opposite sex, even as they also reject the transgender ideology’s claim that a person’s legal sex is determined by their feeling of “gender identity,” not by biology. A U.K. survey shows a similar mix of some sympathy for people with lopsided opposition to the ideology.

The transgender movement is diverse, so its different factions have different goals and priorities. It includes sexual liberationists, progressives, feminists who wish to blur distinctions between the two sexes, and people who glamorize the distinctions between the two sexes. It includes high-profile children, people who are trying to live as members of the opposite sex, and people trying to “detransition” back to their sex, men who demand sex from lesbians, masculine autogynephiles who say are entitled to women’s’ rights, wealthy donors, politicians, political professionals, and revenue-seeking drug-companies and medical service providers.

Transgender advocates claim that two million Americans say they are transgender to a greater or lesser extent. But very few people who describe themselves as transgender undergo cosmetic surgery of the genitals. Only about 4,118 Americans surgically altered their bodies in hospitals from 2000 to 2014 to appear like members of the opposite sex, according to a pro-transgender medical study.

The progressive push to bend Americans’ attitudes and their male-and-female civic society around the idea of “gender identity” has already attacked and cracked many of the popular social rules that help Americans manage the cooperation and competition among and between complementary, different, and equal men and women.