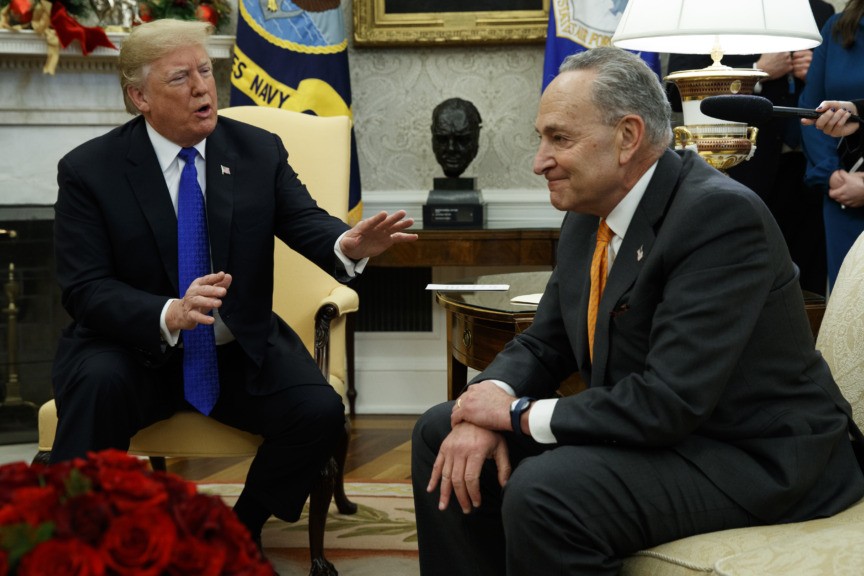 Sen. Chuck Schumer threatened Thursday to keep a government shutdown running into 2019 unless President Donald Trump gives up on his push for a border wall.

He said Thursday, “There will be no additional funds to pay for the wall — it is done.”

Budget bills must originate in the House, and Schumer threatened:

When Democrats take control of the House in January, Democrats will pass one of our two options to fund the government and then [GOP] Leader [Sen. Mitch] McConnell and Senate Republicans will be left holding the bag for a Trump shutdown [in 2019] if they don’t pass our bill now. So there is no way for our Republican friends to avoid the issue, there is no way for Leader McConnell to avoid the issue, fearful of President Trump as they all might be. Either Republicans help deal with the President right now, or they will be left dealing with a much bigger problem in January.

The speech comes after Trump used his Tuesday meeting in the White House with Schumer and House Democratic Leader Rep. Nancy Pelosi to show Americans that the Democrats are blocking his campaign promise of a border wall.

But Schumer’s response is built on his confidence that the establishment media will faithfully echo the Democrats’ blame-Republicans message.

Schumer scoffed at Trump’s push for a border wall, which is intended to slow the northward flow of wage-lowering migrants and lethal drugs. He said:

The President’s position on the wall is totally contradictory, ill-informed, and frankly, irresponsible. It is not a serious proposal. It is a throwaway idea the President used in the campaign and still uses to fire up his base.  A Trump temper tantrum and shutdown threat is not going to change any minds here in Congress.

I often stated, “One way or the other, Mexico is going to pay for the Wall.” This has never changed. Our new deal with Mexico (and Canada), the USMCA, is so much better than the old, very costly & anti-USA NAFTA deal, that just by the money we save, MEXICO IS PAYING FOR THE WALL!

Schumer insisted that Democrats want to keep the government open, even as he taunted Trump for his border wall advocacy.

The president repeatedly promised that Mexico would pay for his unnecessary and ineffective border wall. In his words “100 percent.” On Tuesday, he said he would be proud to shut down the govt unless U.S. taxpayers pay for it. And now, just this morning, the President tweeted that Mexico will pay for the wall through savings from the new NAFTA. Well, Mr. Preisdent, if you say Mexico is going to pay for the wall through NAFTA, which it certainly won’t, then I guess we don’t have to. … Honestly, if the President really believed what he tweeted this morning that his new NAFTA would pay for the wall, he would not be threatening to shut down the government unless American taxpayers fund his wall. You can’t have it both ways.

“We just want to keep the government open,” Schumer claimed.