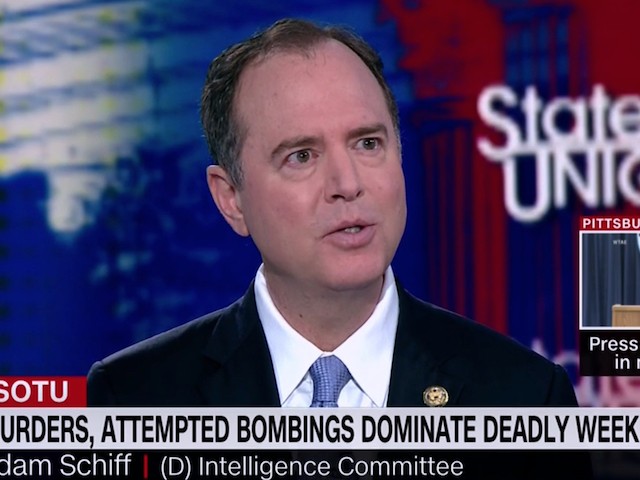 Sunday on CNN’s “State of the Union,” Rep. Adam Schiff (D-CA) discussed the synagogue shooting in Pittsburgh a day earlier that resulted in the killing of 11 people.

Schiff said, “The problem is not how he’s handling the aftermath. Although I don’t agree that this could have been avoided if they had someone armed in the synagogue. That’s not the answer. The broader issue is what kind of climate are we creating in the country? This country is filled with amazing beautiful wonderful people who came here, many of them, attracted by the idea this was a land of opportunity no no matter your religion, ethnic origin, your color. That idea is being tested by those who are preaching hatred and division. And we have to overcome that. And I think the president has a pivotal role there. No one sets the tone more than the president of the United States. And the tone that he sets is one of division, often one of hatred, sometimes one of incitement of violence against journalists and there is no escaping our collective responsibility, but there’s no escaping the tone that he sets for the country. ”

He added, “Honestly, I think this president’s whole modus operandi is to divide us. He gets up in the morning with new and inventive ways to to divide us. It’s not enough that he says the right words on the day of a tragedy if every other day he says things to bring us into conflict with each other”