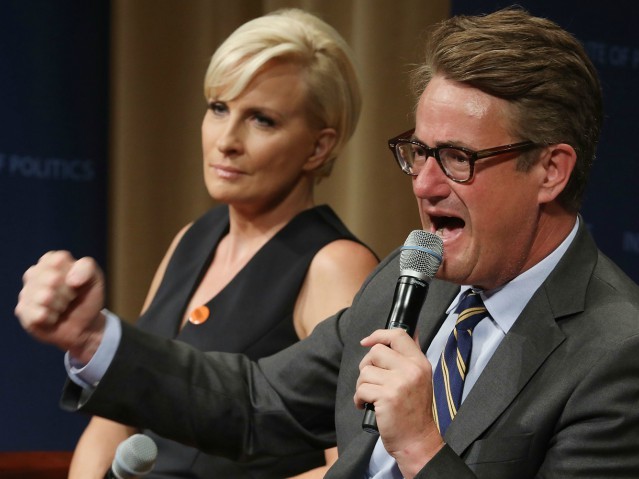 Wednesday on MSNBC’s “Morning Joe,” host Joe Scarborough lit into President Donald Trump for “playing the racist card” and lining up with “some of the most abhorrent regimes in the 20th century.”

“This last week, let’s just be really blunt about it, it’s why Republicans are scared of him right now. It’s been race. He’s been playing the racist card. He said, ‘I’m a nationalist.’ David Duke comes out the next day saying, ‘Thank you. Thank you so much for finally admitting that you’re a white nationalist.’ Then you have even some Republican back-benchers that are linking George Soros and these anti-Semitic threads to the caravan. You’ve got Fox News talking about smallpox and leprosy coming up,” Scarborough stated.

“I’m sorry. I won’t say specifically what regime this is out of, but go back and read your history books and look at some of the most abhorrent regimes in the 20th century,” he continued. “Might as well be certain countries talking about gypsies. It lines up historically exactly with what certain countries were talking about when they were talking about gypsies and Jews. Mika, that doesn’t play well in Peoria. That doesn’t play well in suburban Virginia. That doesn’t even play well in western Iowa. That’s why you have Republicans now distancing themselves from Donald Trump going to Pittsburgh, and the head of the NRCC distancing himself from a Republican who basically has identified with white nationalism in western Iowa, Steve King now, for far too long.”

Scarborough concluded that Trump’s presidency “is like Charlottesville every day,” a reference to the white nationalist rally in 2017 that turned violent.