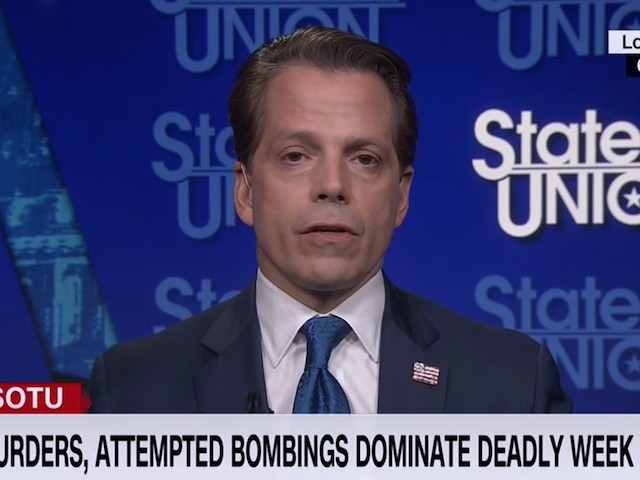 TAPPER: Yesterday, President Trump very clearly, unequivocally talked about this horrific attack in Pittsburgh. His critics point out that he has talked about, quote, ‘very fine people,’ marching alongside anti-semites in Charlottesville for days after he declined but ultimately he did do it. Not long ago he met with Ted Nugent who, you know, is anti-semitic and posted content on Facebook in the oval office. The president said yesterday, you wouldn’t think anti-semitic attacks are possible today but there’s a lot of anti-semitism out there, a lot of bigotry of all kinds out there. Has there has been a tolerance at the very least by the president and people in the White House.

SCARAMUCCI: Listen, the president, he has three Orthodox Jewish grandchildren. When I was in the White House, there’s at least three or four offices that I traveled to Israel four or five times with since I left the White House. It’s not clear to me the people in Israel think that the president is anti-semitic. If anything, they think he’s pro-Israel and has been supportive. One of the symbolic things he did was move the embassy. I think there’s a lot of substance in terms of the policy that’s clearly not isn’t semitic. If anything, it’s pro-Israel and pro-semitic if you will. If you’re making the point that there’s equivocation on the rhetoric, we can go back to Charlottesville. I think in general we have to tone it down. Again, I don’t want to repeat myself. I think it’s worth repeating. He’s the president of the United States. He controls the news cycle and the bully pulpit. He can do it. If he does it, I think he goes through 50% on his approval ratings. I think this sort of stuff, Jake, is a headwind on the president. It’s probably a 5 to 7-point headwind on the president in terms of where he could be in terms of the polls based on what’s going on in the economy and based on how the people feel about the country despite this sort of stuff. My heart goes out to the people. It’s an unbelievable tragedy. When you think about the crime scene and you think about each individual person, I mean, it’s just— we got to figure it out. We have to figure out a way to make this stop.