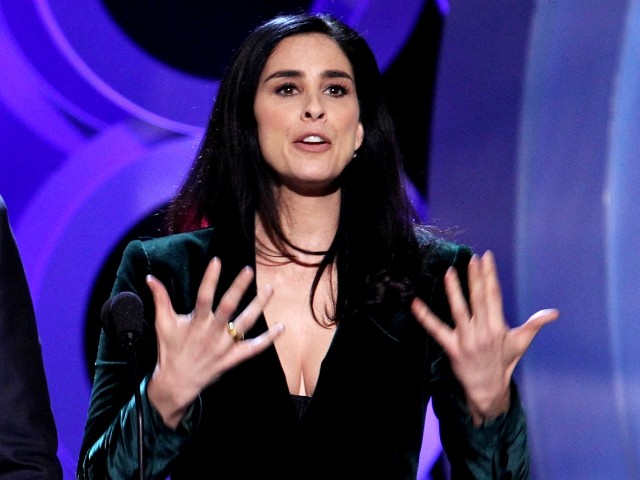 Hollywood women, from Sarah Silverman to Amy Brenneman, are gathering to celebrate the release of a new coffee table book that urges women to boast about having an abortion.

LOS ANGELES this Friday 11/16 join me and @AmyBrenneman and other marvels at @shoutyourabortion’s book party GET TIX HERE https://t.co/WqPjRDRpn0

Actresses, Sarah Silverman, Sarah Wine-Thyre, Amy Brenneman and other “marvels” are inviting their fans to join them for a #ShoutYourAbortion book party Friday night at the Hollywood Improv, tweeted Wine-Thyre.

Have you got your tickets for @ShoutYrAbortion’s book tour yet? I am so excited for Friday at the @HollywoodImprov. It’s going to be a beautiful night of storytelling & community. Join me: https://t.co/w4hBWM9pv9 pic.twitter.com/g3OtLVOyP5

The Improv notes the “party” will be hosted by Margaret Katch and Roni Geva, directors of the comedy digital series ctrl alt delete, about women in a Midwestern abortion clinic.

Comedienne Lizz Winstead tweeted her regrets she cannot be at the Improv event to promote the book.

So bummed I cannot be part of this amazing show supporting this amazing book! I love you @ameliabonow and all involved! LA PEEPS GO! https://t.co/hhhwQrDKOy

#ShoutYourAbortion, a movement acclaimed by former Planned Parenthood president Cecile Richards, began in 2015 when Seattle bartender Amelia Bonow had an abortion at a Planned Parenthood clinic and shared on Facebook her “near inexpressible level of gratitude” for it, reported KUOW. When Bonow’s friend, Lindy West, shared that Facebook post on Twitter, other women began touting their “abortion stories” as well.

Thank you @thelindywest and @ameliabonow for getting this going! Fearless women right here. #ShoutYourAbortion https://t.co/xfgLUrs1fE

By the way. Multiple abortions exist and are pretty common for all the reasons that life and people are complicated. If you would like to share your abortion(s) story with us, we invite you to do so at https://t.co/AtHIbQoKtO. 💛💛 #shoutyourabortion pic.twitter.com/XvkEK0PMS0

None of the “stories” in the book express sorrow or apology for having an abortion. In fact, Bonow said she hopes the book will foster a normalization of the procedure. She said nothing about abortion ending an unborn human life.

✨HEY SEATTLE! ✨ We will be giving away emergency contraception at our @elliottbaybookco event on Saturday!!! Yes you read that right. This EC has a $50 value and will be available to ALL as long as supplies last. See you on Saturday at 7pm. 🔥 ❤️ #shoutyourabortion pic.twitter.com/6C6g1rO8VV

“Our culture is all warped about abortion because the anti-choice movement has made abortion seem like a bad thing that bad people do, instead of a normal thing that normal people do,” Bonow said, adding she is “proud” of women who have had abortions.

After my abortion I felt relieved — and I’m in the majority https://t.co/7xZaPgc7ZD

“We should be proud of surviving all the things we’ve survived, and for choosing to love ourselves,” she said.