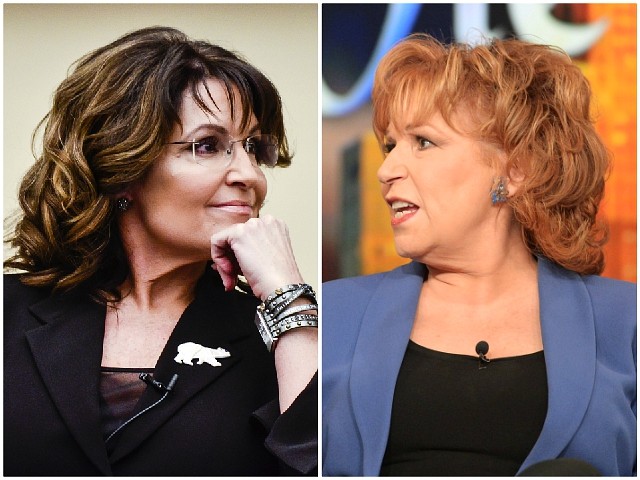 Former Alaska Governor Sarah Palin scoffed at ABC Host Joy Behar’s “crocodile tears” and told her to “suck it up, cupcake,” while citing a Breitbart News article reporting on the removal of Kid Rock as grand marshal of the Nashville Christmas Parade.

The former GOP vice presidential hopeful jumped to her Facebook page to ridicule ABC’s The View host, who reacted with outrage after rock singer Kid Rock called her a “bitch” on live TV during a Friday interview with Fox & Friends.

Palin was incredulous at Behar’s mock outrage over being called a bitch especially considering all the names she has called others.

“Buckle up,” Palin wrote on her Facebook page. “Save the crocodile tears @joyvbehar – if you can dish it out you sure as heck better be ready to take it in.”

Palin went on saying, “You sat idly by, downright giddy, as guests on YOUR show called my daughter a hooker? You’ve said worse about me (and other women), but I’ve got other things to do than spend precious time googling it all.”

“Joyless B – suck it up, cupcake,” Palin jabbed before adding a link to a report citing the time her daughter was called a “hooker” on The View.

Palin’s comments were sparked by a Friday interview where Rock made to criticize political correctness and brought Behar into the conversation.

On Live TV, Rock told Fox & Friends host Steve Doocy, “God forbid you say something a little bit wrong you’re racist, homophobic, Islamophobic… people need to calm down, a get a little less politically correct, and, I would say love everybody. Except I’d say screw that Joy Behar bitch, everybody but that.”

Rock later apologized for using the curse word but did not apologize for the sentiment he was trying to relay to viewers.

“Behar has been an outspoken critic of President Donald Trump, and when myself, Sarah Palin and Ted Nugent visited the White House last year, Behar called it ‘the saddest day in the history of the White House since the British burned it to the ground in 1814,’” Rock said in a statement released later on Friday. “Today I said ‘Screw that Joy Behar b—h.’ Mess with the bull, you get the horns. End of story. I apologized for cursing on live TV, I will not for my sentiment nor do I expect an apology from her or anyone else who has choice words for me or doesn’t like me. God Bless America.”