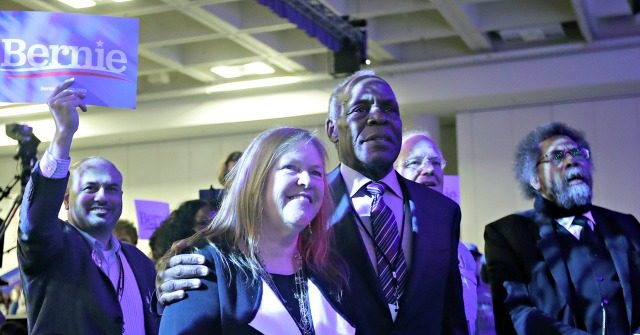 A major donor who introduced 2020 Democrat presidential candidate Sen. Bernie Sanders (I-VT) at his first 2020 “grassroots fund-raiser” previously advocated for the South to secede so it could stop “dumbing down national politics.”

On Saturday, Sanders’s presidential campaign hosted a star-studded event in San Francisco, which it billed as “grassroots fundraiser and friendraiser.” Tickets for attendance started at $27 and went up to $2,800, the maximum contribution allowed by the Federal Election Commission.

Although the event drew attention with its high-profile speakers, including actor Danny Glover and activist Cornel West, the man who introduced Sanders, Guy Saperstein, received little notice. In its coverage of the fundraiser, The New York Times described Saperstein as a “retired civil rights lawyer” and wealthy “political contributor,” who was out of place given Sanders’ broadsides against big money in politics.

What the Times failed to mention is that Saperstein, a former president of the Sierra Club, has a long and somewhat controversial history in Democratic politics.

As previously reported by the Washington Free Beacon, Saperstein in 2014 was a member of a private Google group consisting of “progressive organizers, reporters, and campaign apparatchiks.” As a member of that group, Saperstein openly discussed his support for Southern secession.

“For more than 100 years, the South has been dumbing down national politics, tilting the country in a conservative direction, supporting militarism, all while demanding huge financial subsidies from blue states,” Guy Saperstein wrote in emails to other members. “It would be 100% fine with me if the South was a separate nation, pursuing its own priorities and destiny.”

When the emails were leaked to Media Trackers, a now defunct Wisconsin conservative news outlet, Saperstein doubled down on his stance.

“Secession would be a gradual process, giving any blacks who felt threatened time to relocate,” he told Media Trackers at the time.

It is unclear if Sanders knew about Saperstein’s prior remarks. The senator’s campaign did not return requests for comment.

The issue, however, underscores a potential vulnerability for the self-described Democratic socialist from Vermont. During his 2016 presidential campaign, Sanders failed to gain traction in the South. Sanders lost every single state in the region to former Secretary of State Hillary Clinton, the eventual nominee. In some states like South Carolina, where African-American voters make up a large portion of the Democratic electorate, Sanders was defeated by landslide margins.

Saperstein is also a former member of the Democracy Alliance, the secretive group of liberal billionaires—which also includes Tom Steyer and George Soros—that funds Democratic campaigns and causes across the country.