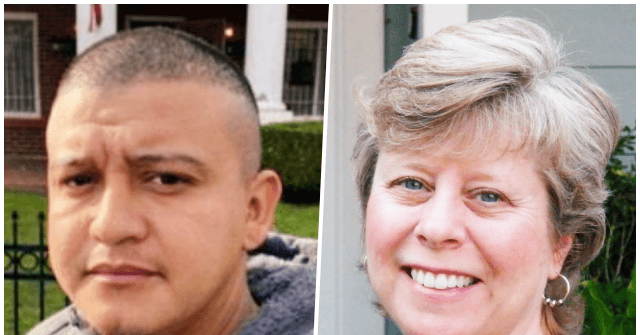 An illegal alien is accused of killing a legal immigrant mother of two children in a drunken hit-and-run crash in the sanctuary jurisdiction of Wake County, North Carolina.

Aldair Leon-Olluas, an illegal alien from Mexico, was arrested and charged this week in the death of 63-year-old Erin Simanskis, a legal immigrant from Canada and naturalized American citizen who worked at WRAL News.

According to police, Leon-Olluas was driving drunk on January 21 when he hit Simanskis who was outside of her vehicle exchanging information with another driver with whom she had been involved in a fender bender.

Leon-Olluas, allegedly driving the white van that hit Simanskis, drove away from the scene. Simanskis died days later from her injuries after having been on life support.

This week, Leon-Olluas was arrested in the Atlanta, Georgia, metro area where he was booked in Fulton County Jail and will be extradited to Wake County to face charges in Simanskis’s death.

Simanskis leaves behind two children, Eric and Emily, as well as her husband, Ed.

Our collective heart is broken @WRAL with the passing of our dear friend and colleague, Erin Simanskis. pic.twitter.com/xa31OasYOM

Wake County has been a sanctuary jurisdiction since at least 2018, refusing to cooperate with the Immigration and Customs Enforcement (ICE) agency and instead shielding criminal illegal aliens from arrest and deportation.

In 2019, across the state of North Carolina, sheriffs refused to turn over to ICE agents more than 500 criminal illegal aliens — protecting them from federal immigration law.

It is unclear if President Joe Biden’s Department of Homeland Security (DHS) would consider Leon-Olluas a priority for deportation if convicted of killing Simanskis. In a recent case, 19-year-old Adrienne Sophia Exum was hit and killed by an illegal alien in Texas.

Exum’s mother recently revealed that her daughter’s killer is not considered a priority for deportation by DHS and thus may not be deported from the U.S.