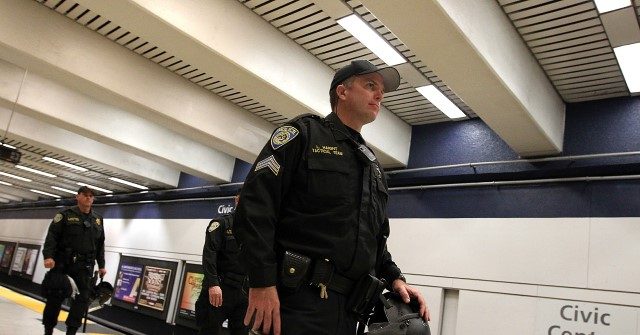 The shooting death of an unidentified man at close range on a BART (Bay Area Rapid Transit) platform in San Francisco on Thursday night has highlighted the need to add more officers to the policing arm of the system, which serves 50 stations along six routes on 131 miles of rapid transit lines.

The police response came almost immediately after the fatal shooting, but BART Police Chief Ed Alvarez said they have vacancies in their force that need to be filled.

Police said the suspect in the shooting, 24-year-old Shane Holman, allegedly shot the victim from behind around 8:30 p.m.

The San Francisco Chronicle reported on the response to the heinous crime:

Holman was arrested almost immediately by two BART police officers who got off an arriving train just after the incident and spotted the victim’s body on the ground, BART Police Chief Ed Alvarez said. Holman was booked into a San Francisco jail on suspicion of homicide. The victim has not been identified pending notification of relatives by the San Francisco medical examiner.

Alvarez said the permanent police presence in the station is a recognition that the station sits in an area of San Francisco beset with open drug dealing and use, illegal weapons and the sale of stolen merchandise.

A BART statement credited the robust police presence on the trains and in the station for “the immediate arrest of the suspect and immediate retrieval of evidence and video surveillance.”

“BART Police has full time presence during all operating hours at Civic Center Station, what we call a fixed post,” the statement continued.

When asked about what BART police have done to stem the number of incidents involving violence and drugs at the Civic Center station, Alvarez noted that the department had increased the police resources there.

But Alvarez said more intense policing is not possible right now because his department is short of personnel. He currently has 22 openings.

The high crime rate in the surrounding neighborhood also plays a role in the conditions at the Civic Center Station.

Concerns about crime on the BART have led some local residents to avoid using the transit system as much as possible. Two men spoke to abc7news.

“A man who asked to be identified as Giovanni said, ‘This station gets very sketchy sometimes. I see people with knives, people with sticks inside. It doesn’t give me a comfortable feeling.’

“Gregory Foley also rides BART regularly for his job in the Tenderloin. ‘Of my clients I work with, the elderly are frightened to go anywhere close to BART,’” Foley told the outlet.

The identity of the “younger, African American male” who was killed will not be made public until his family can be notified, Alvarez said.