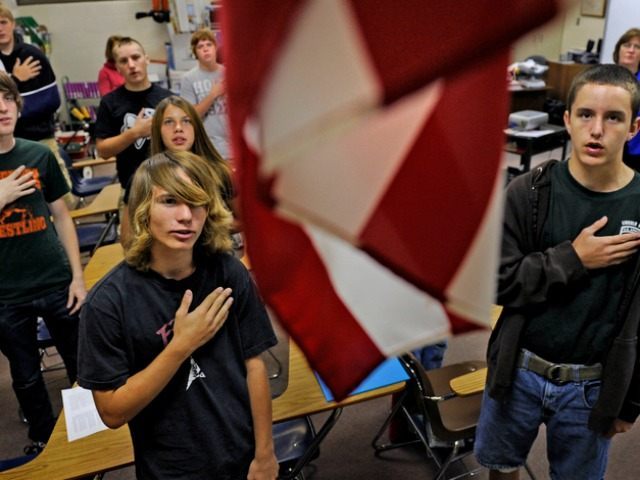 The new president of the San Francisco school board purposefully skipped the traditional recitation of the Pledge of Allegiance at the start of his first meeting, choosing instead to read a quote from poet Maya Angelou.

Stevon Cook had pondered the idea of replacing the recitation of the Pledge of Allegiance after his election to lead the school board. Cook replaced the customary pledge with a quote from Angelou: “When you learn, teach. When you get, give.”

“There are a lot of ways to express gratitude and appreciation for the country and its citizens,” Cook said, reports the San Francisco Chronicle. “This is how I plan to do that.”

District spokeswoman Gentle Blythe said that while schools are required to perform a daily patriotic exercise, public school district meetings are not.

“Although there is a requirement that schools conduct a pledge or similar activity, there is no such requirement for school boards,” Blythe said.

Nevertheless, in San Francisco, the Pledge of Allegiance has been the first order of business at school board meetings for decades, reports the Chronicle. As a member of the board, Cook stood for the pledge, but declined to recite the words.

“We should stand for (the pledge) because those ideals are important to me,” he said. “To speak them is another thing.”

Cook added he finds the current national political climate disappointing, and the Trump administration “has been attacking our liberties.”

School board member Rachel Norton said replacing the Pledge of Allegiance with the Maya Angelou quote “feels respectful and it feels thoughtful.”

“Maya Angelou is an alumnus of (San Francisco’s) Washington High School, so who better to start a new tradition?” she explained.

Cook said he will replace the pledge at each meeting with quotes from various inspirational Americans, including writer Toni Morrison, gay rights icon Harvey Milk and novelist James Baldwin.

“I’m not doing it as a way to seek attention,” he said. “I really think that these people are a great testament to our values and who we should aspire to be as Americans.”