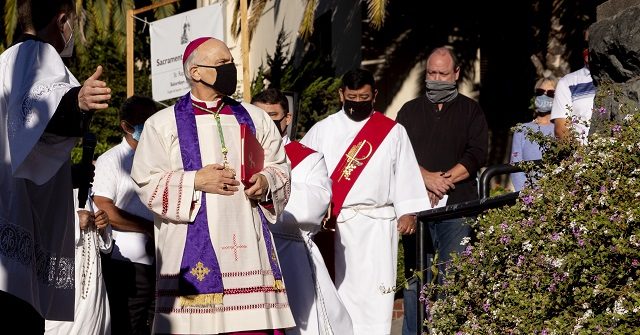 Some 150 people gathered to attend the exorcism Saturday morning in downtown San Rafael, where the statue of St. Junipero had been vandalized during an October 12 protest.

“This sacred site has been desecrated, so we know there is evil here,” Archbishop Cordileone said before beginning the ritual.

“Be gone, Satan, inventor and master of all fallacy, enemy of the salvation of men. Place yourself before Jesus Christ,” the archbishop ordered.

As is customary, the exorcism ceremony was conducted in Latin. Cordileone explained the usage of the ancient language saying it “tends to be more effective against the devil because he doesn’t like the language of the church.”

The faithful in attendance were provided with a program containing an English translation of the prayers, which referred to Satan and his minions as a “cursed dragon and all diabolical legions” and calling for his “proud head” to be “crushed,” language drawn from biblical texts including Genesis 3:15.

Unidentified vandals decapitated a statue of the Virgin Mary this weekend at Our Lady of Lebanon Maronite church in Toronto. https://t.co/RbAGQt9P2E

The San Rafael church is also known as Mission San Rafael Arcangel, the 20th of the California missions, and served as California’s first hospital when it was founded in 1817. Saint Junipero Serra personally founded 9 of the 21 missions, beginning with San Diego in 1769.

During his missionary work, Serra often clashed with Spanish authorities over the way soldiers treated the native peoples, demanding that they be treated as human beings equal in dignity.

Pope Francis made Junipero Serra a saint in a special mass held at the Basilica of the National Shrine of the Immaculate Conception in Washington, D.C. in 2015 during the pope’s first visit to the United States. In the ceremony, Francis told the faithful that Serra had “sought to defend the dignity of the native community, to protect it from those who had mistreated and abused it.”

Some criticized the decision to make Serra a saint, noting that the missionaries condoned the use of corporal punishment on the natives.

Besides prayers, the 20-minute exorcism ceremony also featured the sprinkling of holy water on the bushes and concrete where the statue had stood.