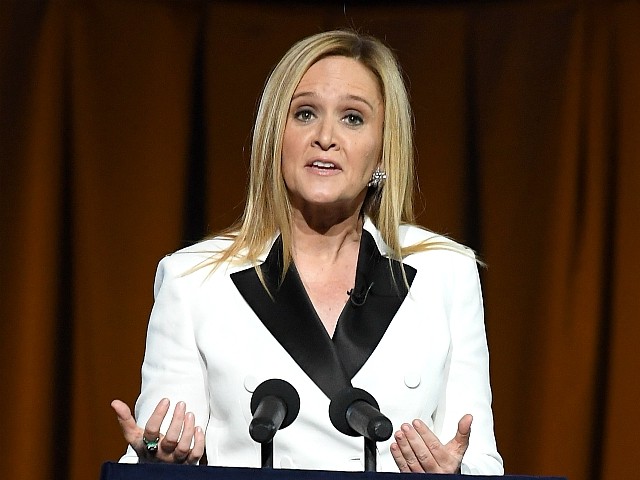 After a testy exchange with Acosta over his policies on immigration, President Donald Trump accused Accosta of being a “very rude person,” adding that “CNN should be ashamed of itself having you working for them.”

“No, we should be ashamed of you working for us!” Bee responded. “Oh my God! You are at work!”

“That press conference was upsetting to watch, but not as upsetting as it was for this woman,” Bee said, before playing footage of a White House aide attempting to wrestle the microphone out of Acosta’s hand.

“I hate this job so much, oh my God, why am I doing this? This is horrible. And plié,” she added, attempting to imitate the young woman.

“President Trump believes in a free press and expects and welcomes tough questions of him and his Administration,” Sanders said in a statement. “We will, however, never tolerate a reporter placing his hands on a young woman just trying to do her job as a White House intern. This conduct is absolutely unacceptable. It is also completely disrespectful to the reporter’s colleagues not to allow them an opportunity to ask a question.”

Here’s a gif of the interaction between @Acosta and the intern who tried to pass on the mic to another reporter pic.twitter.com/FaiBzfYNW2

“The fact that CNN is proud of the way their employee behaved is not only disgusting, it is an example of their outrageous disregard for everyone, including young women, who work in this Administration,” she continued. “As a result of today’s incident, the White House is suspending the hard pass of the reporter involved until further notice.”

Indeed, it was just a few months ago that Samantha Bee defended calling White House advisor Ivanka Trump a “cunt.”