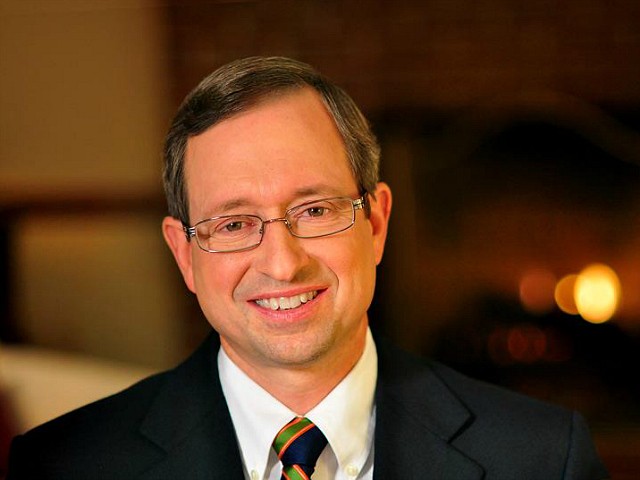 Rohrer appealed, “Our dear heavenly Father who is our creator, the establisher of all that we have, the source of all truth, and the basis upon which this nation was founded, our justice system, our system of law, our separation of power, our understanding of right and wrong, and moral truth, all of those things, Lord, come from you. We recognize that you are the source of that.”

Rohrer added, “We also recognize, Lord, that as a nation, we once embraced that ideology. We once embraced the concept of absolute truth and accountability to a God who created us, but Lord, we have walked away from it, and as our own courts have done, and many in government have done, we have taken that which you have said to be true and we have made it false.”

We have taken the sacred life given to every person, and we have made it legal to murder those who are in the womb of our moms, and Lord, we have shed innocent blood. We have redefined what marriage is in this country despite what you have said. We have witnessed, increasingly, the embracing of deception rather than truth. Running from accountability into pragmatism of all types. Lord, we have done these things to our harm.

He went on: “Now we find ourselves as a nation, in trouble, divided — but divided really along the lines, Lord, not of what the purpose of government necessarily is but really on who You are and what Your role is.”

I would pray, Lord, on behalf of our nation that was established on Judeo-Christian principles coming right off of the pages of scripture, engraved right on the buildings and walls of Washington, in our very own state capital, we recognize that, Lord — I would ask that you would have mercy upon us and that we would return to You in the recognition that truth exists, that you are the author of it, and that we have walked away from it. We don’t have the answers, Lord, but you do. May we run to the source of truth in these days, and may we with open hands lifted, look to You for the direction to give to us now which we can find in Your word, as our founders and those who went before us knew and followed.

American Pastors Network is a ministry that is geared to and focuses on the pulpit and its role in America on proclaiming the truth. It was the pulpit that actually drove the founding of this nation and built into the framework of our law and nation the Judeo-Christian ideology, which was the basis for our law, and it really is the position from which God has established moral truth and moral authority that underpins our law and justice and all that we’ve come to appreciate as freedom in this holy experiment in self-government.

America’s problems will not be solved entirely through politics, warned Rohrer.

“I also believe, that without a doubt, the political office is not the solution to our problems in America,” said Rohrer. “It really comes from the pulpit, and our relationship and understanding that God is the creator of all that we have and He has established a very clear framework for how the family should function, and the individual, and the church, and civil government; the four institutions of authority.

Restoration of America’s freedoms must be rooted in a realignment with Judeo-Christian values, assessed Rohrer.

Rohrer remarked, “We believe that if there is going to be a return and reclaiming of freedoms already lost in this country, and that which is so tremendously under attack as we see all around us but manifested, I think, in a clear way in this Kavanaugh circumstance. If we don’t understand that God has laid out a plan for this nation, we’ve been blessed by it, we have departed from it, and unless we return to Him, we stand in great jeopardy of losing all that we have been given.”

Rohrer linked the battle over Judge Brett Kavanaugh’s nomination to the Supreme Court linked to metaphysical struggle between good and evil.

“Now is the time to be standing up with the truth, not to be running from it,” advised Rohrer. “We called for a day of prayer today in regard to the circumstances in Washington because we do believe that this is not just a political struggle that we are watching but that it is literally a spiritual ideological battle between good and evil. it is something we must deal with in a very serious matter, and we think that going to God in prayer is where we must start.”

Rohrer added, “The example of what we are seeing is the result of rejecting those basic principles that have undergirded our system of justice which was built on biblical principles.”

Rohrer continued, “Justice, biblically, starts with truth, it is balanced with mercy, and is supplied equitably to all. That’s what the bible says, that’s also what Lady Justice says in her picture when she’s on the Supreme Court building with her eyes covered, the scale is in one hand, truth and mercy there in balance. Our Founders knew that. That’s a biblical principle. When that’s done, then, in fact, you have justice.”

Rohrer added, “But what we have been witnessing with this matter in Washington is nothing at all that’s related to truth, and it is certainly not being done even in keeping with the protocols of our own law, let alone what biblical principles would say about that.”

Rohrer referenced Deuteronomy 19:15 and subsequent verses related to biblical standards for the consideration of witnesses alleging crimes against others.

“The purpose of [authorities consulting witnesses] would be to determine the veracity of the claim, of the allegation, to determine where or not the witness was, in fact, legitimate and truthful,” explained Rohrer.

Rohrer continued, “It would determine whether there was truth or error, whether or not it was a false witness or a true witness. That did not happen in D.C. It was not about determining the veracity of the witness. It was about how the witness felt and a whole host of other things.”

Rohrer discussed the importance of determining the veracity of accusations and the presumption of innocence lying with the accused.

It was so important, in the maintenance of justice, that God told the leaders of Israel that when a false charge was brought up, they were to move swiftly to identify the veracity of the accuser, and the burden of proof was on the accuser, not the accused. And if it was found that that was a false witness, then the law was to be brought against all of the false witnesses, and they were to be given an equivalent penalty to the degree that which they raised the accusation and hoped that the accused would get some kind of punishment.

Rohrer added, “God calls it an evil. False accusations are an evil that need to be purged. If it is not done, if it is not purged — and the false witnesses and those that co-conspire along with it — actually given the penalty of law that they wish to heap on someone else, if that does not happen, the justice system completely falls apart.”

Rohrer warned, “Our entire justice system is being threatened and many of our own caretakers — our senators and others — seem to care little about that. That’s a frightening thing.”