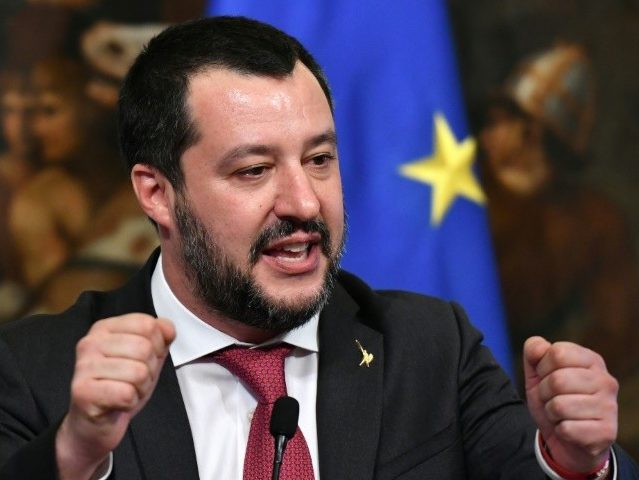 Italian populist interior minister Matteo Salvini has slammed the election of Italian leftist David Sassoli as President of the European Parliament, arguing that voters were not respected.

Sassoli, a member of the Democratic Party (PD), was elected president of the parliament with 345 votes on Wednesday, and told members he would “put an end to the failures of nationalism”, Italian newspaper Il Giornale reports.

The election was immediately slammed by Salvini who said the outcome does not respect “the vote of the Italians”.

The Democratic Party finished a distant second in the European Parliament elections, nearly 12 per cent behind Salvini’s League (Lega), which won 32.27 per cent of the vote, representing the party’s first victory in a nationally-held election.

“Here they continue to share the seats,” Salvini observed, “between Christian Democrats and Socialists” — referring to the positions of European Commission president and head of the European Central Bank (ECB), which had been given to Germany’s Ursula Von der Leyen and France’s Christine Lagarde.

Italy’s Salvini: Merkel and Macron ‘Ruined’ Europe – ‘We Want Nothing to Do with You’ https://t.co/FkjYyQuRCc

Salvini also said he proposed a new minister of European policies to Prime Minister Giuseppe Conte, saying: “I think it is urgent now to have an Italian government man seven days a week in Brussels to defend the national interest.”

He added that he was, in the end, more interested in changing the EU policies than the names of those who occupy the top positions in the political bloc, saying he would look to “change the rules, starting from immigration, tax cuts and economic growth. And on this battle, Italy will finally be a protagonist.”

Salvini’s Identity and Democracy group, an alliance of conservatives and populists, received none of the vice presidency posts within the European Parliament following elections on Wednesday.

Mr Orbán previously alluded to allying himself and Fidesz with Salvini on common issues, but rejected formally joining Identity and Democracy shortly after the European elections in May.

Salvini: Italy on Britain’s Side in Brexit Negotiations, EU has Anti-Democratic Habits, Desire to Punish https://t.co/hhoZU4txll