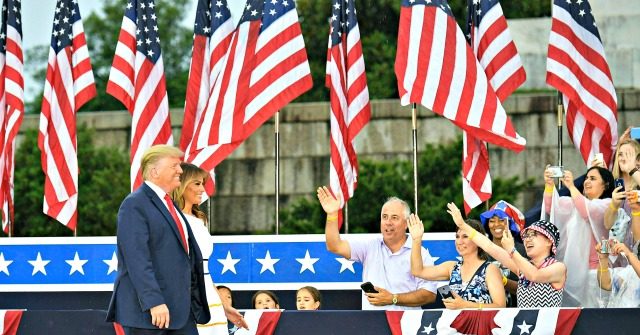 Attendees who came from all all over the country and waited three hours in the rain for July 4th “Salute to America” show told Breitbart News it was “worth it.”

“It was great. A lot of people speechless out here,” said Robb Birch, who traveled to the Capitol from Southwest Missouri with his family. “Three hours were worth it for sure. The rain? Yea, it was worth it.”

I interviewed this guy (on the right). He is a Trump supporter who said he really liked how Trump’s July 4th speech was not political. pic.twitter.com/8fAXjlunSG

Other attendees echoed his sentiments.

“The show was very patriotic. I’m glad we got the politics out of it. And we were just joined as a nation to celebrate our great nation,” a father and Marine Corps veteran from Maryland said. “I thought it was beautiful,” his wife said.

Their son added: “I thought it was really enjoyable. It was nice to see everyone cheering. A lot of people were really excited to be there. A lot of good energy.” He said his favorite part was the military flyovers, and particularly the Air Force F-22 Raptors.

Also interviewed this family. The father (left) said he also liked how Trump’s speech was not political. pic.twitter.com/CsICx59WHu

Crowds began lining up as early as 1:00p.m. ET, when the sun bore down on those waiting in line with the humidity adding to the heat. Heavy rain began around 3:30 p.m. ET, and continued for at least half an hour.

Despite the heat and rain, more attendees continued to arrive to the area around the Reflecting Pool, which was packed by the time the show began at 6:30 p.m. ET. There were little signs of dampened spirits, with sporadic chants of “USA!” and “Four more years!” breaking out.

President Trump’s speech during the show honoring American heroes and the U.S. military also did not seem to disappoint. During the speech, military aircraft from each branch of the armed forces flew across the National Mall, delighting the crowd.

Second flyover: Two @usairforce F-22 Raptors and a B-2 stealth bomber — chants of “USA! USA!” broke out after this: pic.twitter.com/6U0uAixn1j

Expectations for the show were high, according to some attendees Breitbart News spoke with. President Trump had hyped the show beforehand. But his critics also added to the hype, predicting the event would be a “political rally” for Trump.

Attendees acknowledged that criticism of the show, but said they still wanted to come anyway.

“This doesn’t happen often, so I wanted to see something different,” said one man from Virginia in a tie-dyed shirt. “I’m neutral. I like anything and everything. I like America.”

“I know a lot of people say the cost is a lot of money, but I mean, I know this sounds silly, but the last time tanks were in DC were like in the 90s, so it’s just something to see, instead of worrying where every penny goes,” he added.

A father holding his young son, said before the show, “I’m here to celebrate the Fourth of July, and at the same time I’m trying to see everything…this has been hyped up so I want to be part of the experience.”

Great crowd of people at #SalutetoAmerica, who all waited out the pouring rain to see it: pic.twitter.com/NcIdZmq08M

One Georgetown University undergraduate student told Breitbart News that he wanted to come see a “once in a lifetime event which I don’t think this may happen again during another presidency.”

“My wife is Belgian,” he said. “There’s tons of nationalism and patriotism that they don’t share over there.”

“We want to say thank you to our troops, especially on Independence Day,” he added, dismissing criticisms Trump was staging a “military coup.”

“It makes for great news — the military coup aspect. I don’t know — where’s that founded?” he said.

Attendees said they were pleased that the speech Trump delivered was not political at all.

“The speech was great. A lot of people were trying to say beforehand that they were worried that it was going to be all about President Trump, that he was going to try to turn it into a rally. But definitely not what any of us saw tonight,” said Birch, who was wearing a Make America Great Again hat.

“It was focused on the nation, that it was non-partisan, that it was really about Independence Day was about. It was about acknowledging the men and women who have died for our freedom. And that was great,” he said.

“He did a very good job covering all the branches of the armed forces, and even the people he acknowledged before he got started. I mean, really, some of them were tearing up, some of us were tearing up…it was great.”

There was also criticism of some attendees being given “VIP” tickets for the show, for seats closer to where the president would speak in front of the Lincoln Memorial.

But many of those attendees were military families, like Bill Wheatley’s, from Stockton, New Jersey.

“I’m just here to celebrate the Fourth of July and Independence Day and you know have a good time, and be with my family,” Wheatley told Breitbart News.

“My son is going to Marine [Officer Candidate School] on Sunday, he reports, so we want to spend some time together. My daughter is in Army basic training right now, so we just wanted to come and be together and celebrate our great country and our freedom and that we’re able to do this and just come here and have a nice time,” he said.