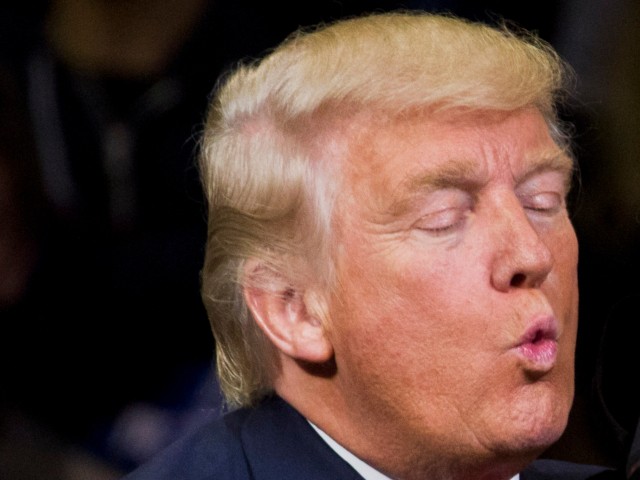 A Salon writer claims President Donald Trump has had such a negative impact on the mental health of Americans that he has even “wrecked” their intimate sex lives.

The writer said he sought Block – host of the HBO TV special Radio Sex TV with Dr. Susan Block– in order to find out more about so-called “Post-Traumatic Trump Disorder.”

Block said she has even gone further to identify a diagnosis called “Post-Trump Sex Disorder.”

“Trump has created feelings of fear, loathing, and nausea,” she reportedly told DeVega. “People just don’t want to have sex. This would mainly be seen with women who are just appalled at how creepy Trump is. He takes what is often a positive male attribute of confidence and pushes it way over the line into a rape-like and rape-entitled kind of arrogance.”

“Most Americans of conscience, and decent people more generally, are appalled by Donald Trump’s personal and public behavior,” DeVega told Block. “Yet, there are others who are aroused by Donald Trump and see him as a symbol of sexual potency and power.”

Yes, Donald Trump is a turn-off for many people. But for some people they are turned on and titillated by Donald Trump. They are not suffering from Post-Trump Sexual Disorder. Sex does not always turn us on the way we think it ought to. A lot of people are attracted to bad boys. I emphasize “people” because it is both men and women who are aroused and attracted to and titillated by Donald Trump. There is definitely a homoerotic attraction for Trump being experienced by his usually very homophobic male supporters. Both men and women really do find Trump to be an appealing “bad boy” and “evil daddy” who’s really hot.

Block continued that Trump is “the daddy of a dysfunctional United States family” – aka the “Big Mean Sexy Daddy.”

“And of course evil can be very sexy,” she added. “Evil is fascinating. As you said previously, Donald Trump is a cult leader and Charlie Manson-like figure. People are just charged up by him and some of those people are driven to commit great crimes by that kind of charisma.”

Block wholeheartedly agreed, stating, “Trump’s supporters want to be spanked by him.”

DeVega then asked Block for advice for those who have diagnosed themselves with “Post-Trump Sex Disorder.”

NewsBusters observed that many journalists, on the other hand, seem to find Democrat presidents sexually arousing.

The other night I dreamt of Barack Obama. He was taking a shower right when I needed to get into the bathroom to shave my legs…. I launched an e-mail inquiry…. Many women — not too surprisingly — were dreaming about sex with the President.

#OnThisDay in #MediaBias history: Time magazine celebrates the election of Bill Clinton: “We’re finally getting a President… who we can imagine having sex with.” @theMRC @NewsBusters pic.twitter.com/2gngdtMBOX

“At a moment when the American libido seems to oscillate between Puritanism and rampant exhibitionism, how significant is it that for the first time in more than 30 years the nation has elected a President with sex appeal?” Shapiro wrote. “Cheryl Russell, editor of The Boomer Report …, captures a new dimension in the national psyche when she confides, ‘Every woman I know is having sex dreams about Bill Clinton. We’re finally getting a President our own age who we can imagine having sex with.’”