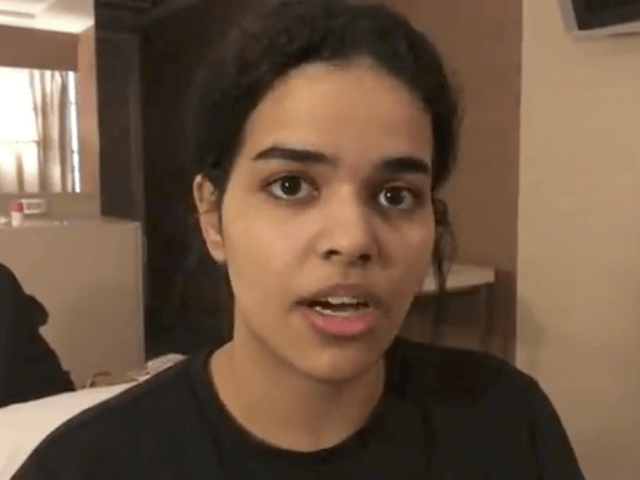 A young Saudi woman who has renounced Islam and remains stranded at Bangkok’s main airport after fleeing her “abusive” family has been assured by Thai police she will not be deported.

Thailand’s Immigration Police chief said Monday the 18-year-old who was stopped in the Thai capital as she was trying to travel to Australia for asylum will not be sent anywhere against her wishes.

Maj. Gen. Surachate Hakparn said Rahaf Mohammed Alqunun will be allowed to meet U.N. refugee officials. He said he will discuss allowing them to see her later Monday.

Alqunun is barricaded in an airport hotel room and has been pleading to talk to the U.N. officials. She claims her passport has been seized by a Saudi official.

As Breitbart Jerusalem reported, the ex-Muslim has detailed her plight on Twitter, saying: “Because I got nothing to lose I’m going now to share me real name and my all information.”

“My name is Rahaf Mohammed Mutlaq Alqunun, and this is my picture.

“I’m afraid, my family WILL kill me.”

Because I got nothing to lose I’m going now to share my real name and my all information.

Alqunun’s ordeal began on Saturday when she was stopped by officials at Bangkok’s Suvarnabhumi airport. The teenager later claimed she was tricked into giving up her passport and moved to a hotel airport.

Late on Sunday, Ms Alqunun had warned: “My brothers and family and the Saudi embassy will be waiting for me in Kuwait.

“They will kill me. My life is in danger. My family threatens to kill me for the most trivial things.”

Alqunun has also claimed that her family has prevented her from continuing her education – and said she feels “oppressed” because she has not been allowed to drive or travel.

“I love life and work and I am very ambitious but my family is preventing me from living,” she added.

Video from @rahaf84427714 just sent from her hotel room at the #Bangkok airport. She has barricaded herself in the room & says she will not leave until she is able to see #UNHCR. Why is #Thailand not letting @Refugees see her for refugee status determination? @hrw #SaveRahaf pic.twitter.com/3lb2NDRsVG

Thai officials deny she was detained at the behest of the Saudi government.

Colonel Choengron Rimphadee, Thailand’s immigration department’s deputy spokesman, said she had been denied entry because she could not show a return ticket, hotel reservation or proof of funds, adding: “Whoever violates Thai immigration law will be considered a prohibited person and treated the same.”