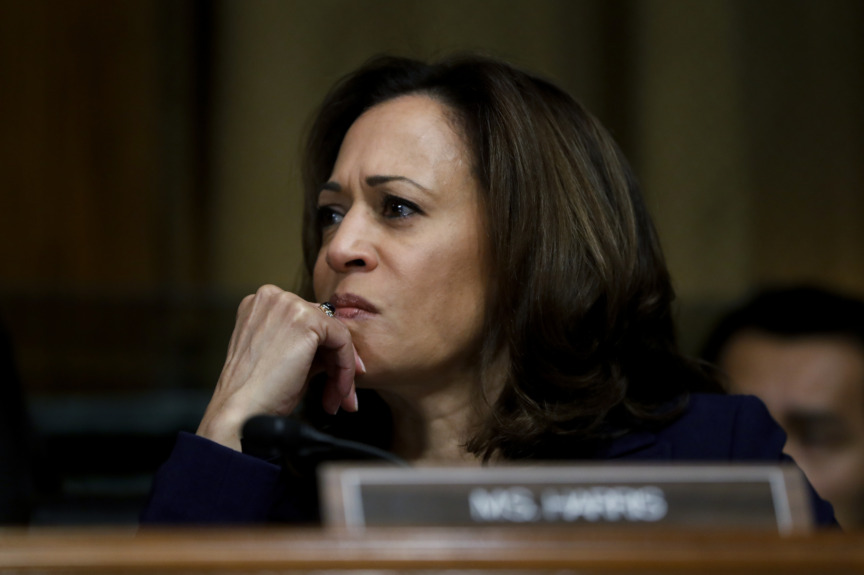 The Sacramento Bee on Thursday evening blasted Sen. Kamala Harris (D-CA) for claiming she was unaware that one of her top aides, Larry Wallace, engaged in inappropriate workplace behavior that led to a $400,000 harassment settlement, saying Harris’s explanation was “far-fetched.”

Wallace, who had known Harris for 14 years, resigned on Wednesday evening after the Bee inquired about the $400,000 harassment settlement that resulted after his female assistant accused him of ordering her to crawl on her hands and knees underneath Wallace’s desk while she was wearing skirts and dresses and change the paper or ink in Wallace’s printer. Sometimes, Wallace ordered her to crawl under his desk in front of other male co-workers, according to the lawsuit.

“I did not,” Harris, the potential 2020 contender, reportedly said on Thursday when asked if she had known about the lawsuit. “Nope.”

“We were unaware of this issue and take accusations of harassment extremely seriously. This evening, Mr. Wallace offered his resignation to the senator and she accepted it,” Adams told the Bee on Wednesday.

“Harris owes the voters more than just a four word denial on the steps of the U.S. Senate. She should fully explain her relationship with Wallace, and, by extension, her staff and why it insulated her from an issue upon which she has taken a leading national role,” the Bee’s editorial board wrote. “There are only a few possible interpretations here, and they are unpleasant. Wallace wasn’t out on the periphery of Harris’ staff; he was a senior aide she knew for 14 years — hardly a stranger. For Harris to flatly deny any knowledge of this settlement seems, shall we say, far-fetched.”

Danielle Hartley, who filed the “gender harassment” lawsuit, also accused Wallace of ordering her to do menial tasks and personal errands. When she returned to the office after completing these tasks, her co-workers would reportedly mock her by asking, “Are you walking the walk of shame?’”

When Hartley complained to her supervisor, her superiors reportedly retaliated against her and denied her promotions for which she was qualified.

Harris’s home state newspaper argued that if Harris was really unaware of Wallace’s behavior, it shows that she “isn’t a terribly good manager, and that her staff was insulating her from the information critical to the performance of her duties.”

“This is hardly a propitious beginning to a presidential candidacy,” the Bee continued.

As the Bee noted, Wallace “served as the director of the Division of Law Enforcement” at the California Department of Justice while Harris was the the state’s attorney general in 2016 before Harris hired Wallace to be a senior adviser in her Sacramento Office. Hartley reportedly filed the lawsuit on Dec. 30, 2016, “when Harris was still attorney general but preparing to be sworn in as California’s newly elected Democratic senator.” The lawsuit was “settled less than five months later, in May 2017, by Xavier Becerra, who was appointed to replace her as attorney general.”

The Bee pointed out that “Harris’ handling of this matter is eerily reminiscent of a 2010 case during her tenure as district attorney, where a judge rebuked her office for hiding problems in the drug analysis section of the San Francisco police crime lab.”

“Part of being an elected official is not only taking strong political positions and executing them fairly, it’s also being able to manage the people you entrust with responsibility,” the Bee argued. “In this case, Harris has fallen short. Harris owes the voters more than just a four word denial on the steps of the U.S. Senate. She should fully explain her relationship with Wallace, and, by extension, her staff and why it insulated her from an issue upon which she has taken a leading national role.”

Harris has said she will decide over the holidays whether she will run for president in 2020.