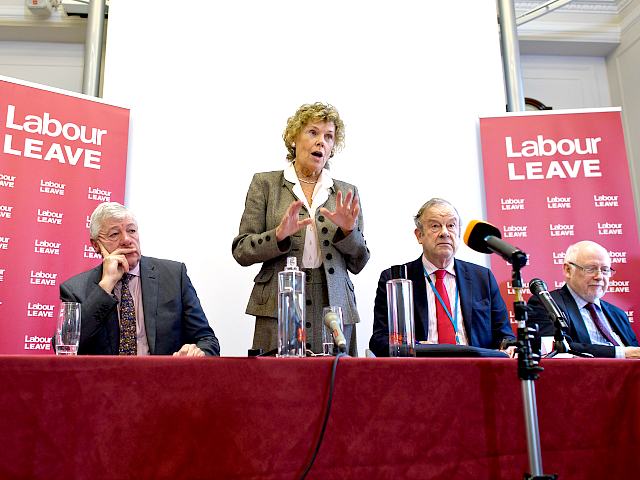 Pro-Brexit group Labour Leave has demanded a public inquiry into the Brexit negotiations after a customs expert told MPs he suspected HMRC was given a “political instruction” not to discuss alternatives to the contentious “backstop”.

The so-called backstop is a fallback mechanism included in Theresa May’s “worst deal in history” with the European Union, designed to maintain the supposedly all-important open border between the Republic of Ireland and the British province of Northern Ireland.

It annexes Northern Ireland into the EU Customs Union, incorporating mainland Great Britain into an effectively EU-controlled “single customs territory”, with no time-limit on this arrangement and the UK barred from ending it without the EU’s agreement.

Proponents of Mrs May’s deal claim this is the only way to avoid a so-called “hard border” in terms of customs — a “hard border” already exists in terms of tax, excise duty, currency, and so on, although this is seldom mentioned.

This has long been disputed by Brexiteers and Northern Ireland’s Democratic Unionist Party (DUP), who believe checks could easily be avoided through pre-declaration, trusted trader systems, and technological solutions — or if the EU simply agreed to a standard tariff-free trade deal and mutual recognition of standards.

It now appears that alternatives to de jure or de facto membership of the EU customs regime may have been not only unconsidered, but actively blocked from consideration by the Remainer-dominated government.

Dutch customs expert Hans Maessen told a Parliamentary select committee that HMRC told him they were “not allowed” to discuss alternative solutions, and that in his view this was likely a “political instruction”.

We’ve said before, the behaviour of MPs and civil servants has been so awful, so dishonest, so devious, so damaging to the public interest, that there needs to be a public inquiry into this utter shambles. https://t.co/QgswjhJIvm

“I talked to [EU chief negotiator Michel] Barnier [and his] team… I had presentations from HMRC and the European Commission… HMRC never discussed anything,” he said.

“They came there to sell Chequers… We would show our scepticism; we would say ‘Well, there are alternatives’, [and HMRC would reply] ‘Oh really? We’re not interested’,” he added.

The revelations will add to a growing sense among Brexiteers that Mrs May’s Brexit deal is not the best a government afraid to pursue “No Deal” could get from an intransigent EU, but that the Remain-voting Prime Minister has “not even tried” to secure a deal which would have seen Britain reclaim full sovereignty over immigration, territorial fishing waters, regulatory regime, and international trade.

Labour Leave, which brought together the small contingent of Labour Brexiteers still carrying the torch for Labour movement heavyweights such as Tony Benn, Barbara Castle, Peter Shore, and Bob Crow, followed up Mr Maessen’s allegations with a call for a full public inquiry into the Brexit negotiations.

The call comes amid widespread speculation that the Government — and Her Majesty’s Treasury under Chancellor Philip “Remainer Phil” Hammond, in particular — has been actively sabotaging the entire process, and especially efforts to prepare for “No Deal”, to ensure the country cannot leave the EU cleanly without a great deal of damage and disruption.