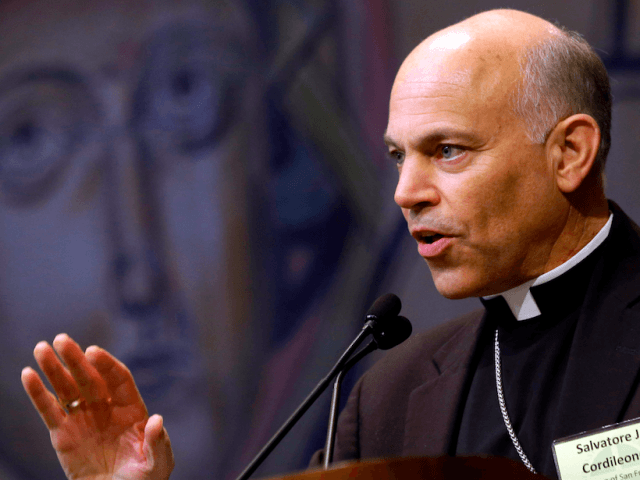 “In our bishops region’s audience with Pope Francis last January during our ad limina visit (the visit diocesan bishops make every five years to the Vatican), the topic of civil unions came up in conversation,” Archbishop Cordileone wrote in a statement. “The Holy Father clearly differentiated between a civil arrangement which accords mutual benefits to two people, and marriage.”

“The former, he said, can in no way be equated to marriage, which remains unique,” the archbishop added, while urging for a broader understanding of civil unions to include non-sexual arrangements.

“I would add that a civil union of this type (one which is not equated to marriage) should be as inclusive as possible, and not be restricted to two people of the same sex in a presumed sexual relationship,” he said. “There is no reason, for example, why a brother and a sister, both of whom are unmarried and support each other, should not have access to these kinds of benefits.”

For the sake of mutual benefits, the matter of sexual activity is completely irrelevant, he suggested, and therefore people’s gender or sexual orientation should not factor into such unions.

“The nature of marriage, the place of sex within a virtuous life, these great teachings of the Church come to us from God, are illuminated by reason, and do not change,” he concluded.

Pope Francis made a stir Wednesday when a documentary was released in which he proposes that civil unions could help homosexual persons procure mutual benefits from the state.

“What we have to create is a civil union law. That way they are legally covered,” the pope said in the film. “I stood up for that.”

Catholic teaching, however, expressly condemns civil unions and forbids Catholics from endorsing them.

“Those who would move from tolerance to the legitimization of specific rights for cohabiting homosexual persons need to be reminded that the approval or legalization of evil is something far different from the toleration of evil,” the text states.

The text lays out a series of arguments as to why Catholics can never support legislation conferring legitimacy on homosexual couples as civil unions.

“Laws in favour of homosexual unions are contrary to right reason because they confer legal guarantees, analogous to those granted to marriage, to unions between persons of the same sex,” the document declares. “Given the values at stake in this question, the State could not grant legal standing to such unions without failing in its duty to promote and defend marriage as an institution essential to the common good.”

Pope Francis himself has vigorously opposed gay marriage, insisting on the right of every child “to grow up in a family with a father and a mother,” and that man-woman complementarity “is the basis of marriage and the family.”

In June 2010, then-Cardinal Bergoglio wrote that a proposed Argentinian law that would recognize same-sex marriage would “gravely wound the family.”

Behind this project, he asserted, was “the envy of the devil, by which sin entered into the world, as he cunningly seeks to destroy the image of God: man and woman.”

“Let’s not be naïve,” the future pope wrote, “this is not just a political struggle; it is an attempt to destroy God’s plan. It is not merely a bill–this is only the instrument–but a move by the father of lies who seeks to confuse and deceive the children of God.”