Former Interior Secretary and Navy SEAL veteran Ryan Zinke released an ad Tuesday channeling President Theodore Roosevelt after an 80-year-old statue of the former president was removed from the front steps of the American Museum of Natural History last month.

Zinke, a Republican who served as a congressman in Montana before joining the Trump administration in 2017, is featured in the ad reciting an oft quoted excerpt from Roosevelt’s famous 1910 speech, “Citizenship in a Republic,” better known as the “Man in the Arena” speech.

“It is not the critic who counts, not the man who points out how the strong man stumbles or the doer of deeds could have done them better. The credit belongs to the man who is actually in the arena,” Zinke begins in the ad.

The ad, which will appear on YouTube as well as other social media platforms, shows headlines flashing Zinke’s career successes and photos of him from his time spent outdoors, at the White House, and in the military. The Montana Republican previously served as a SEAL for 23 years, including overseas in Iraq, and retired as a commander in 2008.

“… So that his place shall never be with those cold and timid souls who neither know victory or defeat,” Zinke says as his recitation concludes.

The message comes after the New York City museum removed its grand statue of Roosevelt on horseback — flanked by a Native American and black man — last month following a commission voting last June to remove it because it “supports a thematic framework of colonization and racism.” 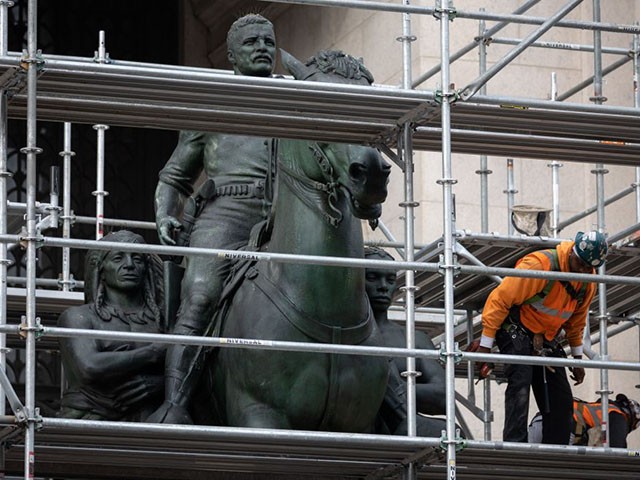 Construction workers erect scaffolding around the statue of President Theodore Roosevelt at the American Museum of Natural History in New York City on December 2, 2021. (YUKI IWAMURA/AFP via Getty Images) 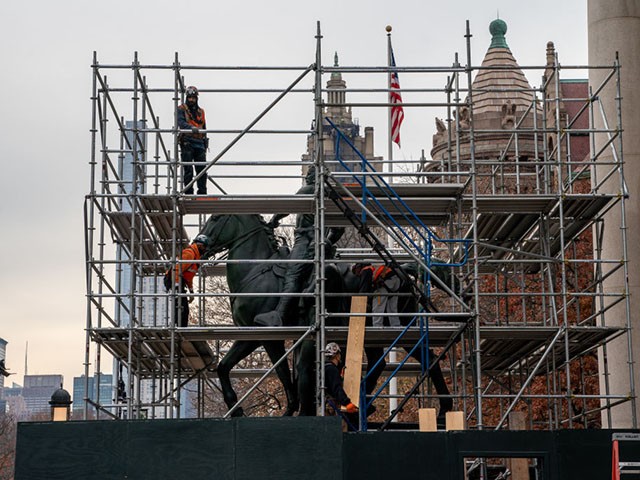 The President Theodore Roosevelt statue at the American Museum of Natural History is prepared for removal on December 2, 2021, in New York City. (David Dee Delgado/Getty Images)

The ad campaign is part of Zinke’s bid to return to Congress as a representative of Montana’s new lean-red First Congressional District, which covers western Montana and includes the relatively populous Democrat area of Missoula.

The district, the second of two districts total in the Treasure State, was a result of the 2020 U.S. Census population update.

“The lessons of President Theodore Roosevelt still ring true today,” Zinke said in a statement to Breitbart News about his new ad release. “Rather than allow the America Last radicals to erase him from history and literally tear down his legacy, we need to reclaim it and stand proudly on those principles.”

Zinke is facing several other Republicans in the primary for the First District race, taking place in June, but an early poll from local outlet KTVH observed that Zinke, who has the most name recognition in the primary field, “looks like the obvious front-runner.”

The former congressman said of his ad, “We see people bending the knee to the cancel culture woke mob, and it is destroying our country. It’s tearing communities apart, seeping into our kids’ education and development, and it’s even damaging military readiness. It’s gotta stop now.”