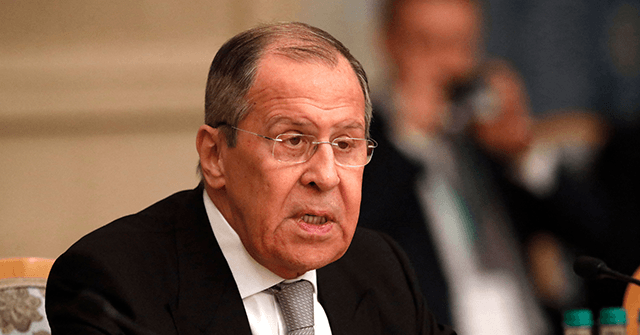 Russian news agency TASS relayed concerns Lavrov expressed in an interview with unnamed Chinese “mass media” that “vaccine passports,” or documentation proving someone is vaccinated as a prerequisite for international travel, must only be implemented after “extra consideration.” Lavrov specifically noted the World Health Organization (W.H.O.) has not endorsed the use of “vaccine passports.”

China implemented a vaccine passport program allowing international travelers to skip onerous coronavirus testing and other regulations to enter the country in mid-March. The regime considers only those inoculated with a vaccine candidate developed in China as being officially “vaccinated,” meaning those who have received doses of Sputnik V, the Russian-made vaccine candidate, will not have “passports” fast-tracking entry into China.

“Everyone tries to figure out the ways for the normal functioning of countries, peoples and citizens in the times, when the coronavirus infection remains to be a serious challenge for many regions of the world,” Lavrov reportedly said in the interview. “The use of the so-called ‘vaccination passports’ is under discussions in this context.”

He did not dismiss the possibility of Russia implementing such a program, but encouraged “extra consideration and all-embracing evaluation of these initiatives.”

“We must prevent violations of human rights and the rights of a traveler in case such certificate – I don’t want to call it a passport – is absent,” Lavrov was quoted as saying. “People travel a lot. This is a fact of life, the new reality of the international life.”

Lavrov did not specifically note that the W.H.O. had discouraged vaccine passports, instead stating that the United Nations body had not “expressed its final opinion in regard to such passports.”

“Vaccination is just not available enough around the world and is not available certainly on an equitable basis,” Dr. Michael Ryan, director of the W.H.O. Health Emergencies Program, warned in remarks to the press on March 8. Ryan emphasized that such a system could ensure “inequity and unfairness [are] further branded into the system.”

Xinhua, China’s state news agency, notably did not include the Lavrov remarks published in TASS in its highlights of his interview with the Chinese government press. Xinhua noted that Lavrov spoke to Xinhua “and several other media outlets.” Xinhua headlined their coverage of Lavrov’s remarks with his criticism of the United States.

“Russia-China relations are marked by comprehensive partnership and strategic coordination, which have entered a new era,” Lavrov reportedly said. “However, these objective developments, which are leading to the formation of a truly multipolar and democratic world, are unfortunately being hindered by Western countries, particularly the United States.”
Lavrov described Moscow’s relationship with Beijing as the best in history.

Lavrov reportedly arrived in Guangxi province, southern China on Monday and met with Chinese counterpart Wang Yi. According to Foreign Ministry spokeswoman Hua Chunying, the two reached “broad consensus … on strategic communication.” Neither government has expanded upon this update.

Lavrov’s visit to China follows a failed meeting between Wang and representatives of President Joe Biden last weekend. Secretary of State Antony Blinken and National Security Advisor Jake Sullivan met Wang and Politburo member Yang Jiechi in Alaska over the weekend in a meeting that began with Yang accusing America of being irreparably racist and suffering from human rights shortcomings. China is currently imprisoning millions of people in concentration camps and practicing genocide against its Muslim ethnic minorities, a reality Blinken mentioned in passing.

The Chinese system currently works similar to China’s “social credit” system, in which the government assigns point values to the life of each individual based on their “good citizenship” and loyalty to the Communist Party. Users download a mobile application that gives them a QR code. Airport officials can read the QR code and receive confirmation that the person in question is vaccinated.

Chinese state media has proposed the possibility of the Communist Party using its domestic experience to run a global “vaccine passport” network that would grant it the power to control who can leave their respective countries.

“Chinese experts noted on Tuesday that China can help by sharing its experience with and provide technical support to the WHO to organize the issue,” the Global Times, a state  propaganda newspaper, suggested this month, “as China is the most experienced country in using a health code system in the world while the W.H.O. is the most proper organizer for the matter to ensure independence, fairness and data security.”

An alleged “expert” quoted in the newspaper claimed China could build an international vaccine passport system in a week.