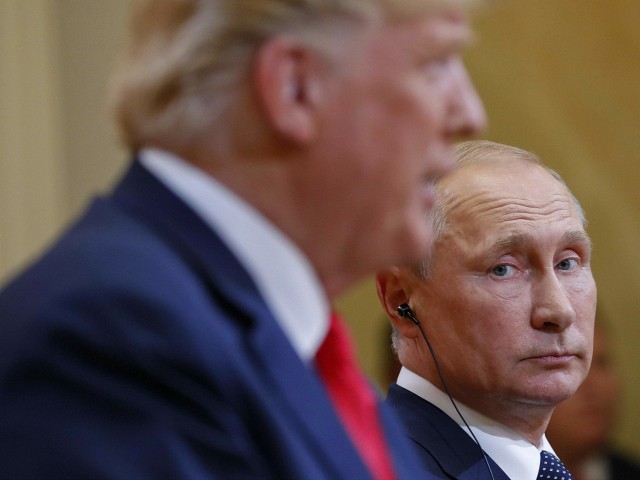 President Donald Trump on Saturday indicated the United States will withdraw from the 1987 Intermediate-Range Nuclear Forces Treaty (INF) due to persistent Russian violations.

National Security Adviser John Bolton, currently in Moscow for talks with Russian officials, has long been critical of the INF. As far back as 2011, Bolton warned strategic threats such as China, Iran, and North Korea were not covered by the INF so it dangerously limited America’s options for dealing with them, for the sake of containing an enemy that no longer exists in the form that menaced the world in 1987.

He accused Russia of repeatedly violating the treaty in a September 2014 op-ed for the Wall Street Journal and criticized the Obama administration for its weak response to Moscow’s provocations:

Russia has extensively tested a new ballistic missile, the RS-26 Rubezh, which violates the INF. Despite the country’s demographic and economic decline, Moscow also is overhauling its nuclear and conventional arsenal, adding new, multiple-warhead ballistic missiles, and suspending the Conventional Forces in Europe Treaty. Russia claims that new threats along its southern border and the rise of China require modernizing its nuclear stockpile. “Why is it that everyone and anyone can have this class of weapons and we and the United States cannot?” Sergei Ivanov, President Vladimir Putin’s chief of staff and former defense minister, said last year about intermediate-range missiles.

As with the Russian invasion of Ukraine, Hamas, and the rise of the Islamic State, Mr. Obama has so far responded aimlessly. When then-Sen. John Kerry learned of Russian INF cheating during a classified 2012 Senate hearing, he reportedly declared: “If we’re going to have treaties with people, we’ve got to adhere to them.” Instead, the Obama administration seems to think that the new Russian RS-26 reaches intercontinental distances, and is thus not prohibited, even though Moscow has tested it for the lesser distances the INF Treaty prohibits. Required by statute to make such disclosures to Congress, the administration nonetheless is reluctant to find Moscow in material breach of the treaty, which could allow Washington to suspend its own treaty obligations.

Bolton urged the Obama administration to take the opportunity afforded by Russian violations to withdraw from the treaty and urged Republican candidates in the then-upcoming 2016 election to promise they would do so. Pulling out of the treaty would allow the United States to develop precision non-nuclear intermediate-range missiles that could provide a “prompt global strike” capability, able to target threats ranging from terrorist leaders to rogue weapons of mass destruction.

Otherwise, Bolton feared America would be handicapped as the only country that saw itself bound by treaty against deploying intermediate-range forces, a situation Bolton denounced as “the ultimate absurdity.”

“While your administration finally stated in 2014 (as a result of pressure from our committees) what had been well-understood before then – that Russia was illegally flight testing intermediate-range ground-launched cruise missiles – neither the State Department nor the Defense Department imposed consequences on Russia,” Thornberry and Nunes wrote to Obama.

They warned Obama that failing to confront blatant violations “encourages more Russian misbehavior and leads to a more dangerous world.”

President Trump referenced these arguments at a rally in Nevada on Saturday.

“Russia has violated the agreement. They have been violating it for many years. And we’re not going to let them violate a nuclear agreement and go out and do weapons and we’re not allowed to,” the president said.

Trump mentioned China as well as Russia when elaborating on his statement, nodding to concerns the INF hinders America from developing medium-range weapons while leaving China free to litter the contested waters of the South and East China Seas with missile launchers.

Deputy Foreign Minister Sergei Ryabkov was quoted as telling state news agency Tass that leaving the treaty “would be a very dangerous step.”

It would “cause the most serious condemnation from all members of the international community who are committed to security and stability.”

Konstatin Kosachev, head of the foreign affairs committee in Russia’s upper house of parliament, said on Facebook that a U.S. withdrawal from the treaty would mean “mankind is facing full chaos in the nuclear weapons sphere.”

“Washington’s desire to turn back politics cannot be supported. Not only Russia, but also all who cherish the world, especially a world without nuclear weapons, must declare this,” Gorbachev was quoted as telling the Interfax news agency.

The Kremlin stated Russian President Vladimir Putin will seek “clarifications” about the INF when he meets with Bolton on Tuesday.

Although the Russians and various arms-control organizations promised swift international condemnation of Trump’s move, the initial response from Europe ranged from energetic support by the U.K. to Germany’s worries about the “difficult questions” facing Europeans. The Germans were careful to note Russia has not adequately addressed U.S. allegations of cheating.

The INF is due to expire within the next two years, so some critics of Trump’s decision accuse him of handing the Russians a propaganda victory instead of waiting for the old treaty to expire and negotiating a better new deal.

Others, as with Brookings Institution senior fellow and former U.S. ambassador to Ukraine Steven Pifer, thought even the imperfect INF kept Russian cheating to a relatively discreet minimum and they will now be emboldened to research more weapons and deploy them openly.

“Once the United States withdraws from the treaty, there is no reason for Russia to even pretend it is observing the limits. Moscow will be free to deploy the 9M729 cruise missile, and an intermediate-range ballistic missile if it wants, without any restraint,” Pifer warned in a statement quoted by USA Today.

Trump administration officials have displayed little appetite for such “they only cheat a little if we totally honor our commitments” arguments, and they are disinclined to let flawed or ineffective agreements limp along for years instead of negotiating better deals immediately. They also have limited patience for arguments the United States should make sacrifices in the name of “global leadership” when none of the world’s bad actors are inclined to follow the noble American example.

President Trump’s comments suggest he envisions a new treaty that would include China as well. Bolton was skeptical of such a multilateral agreement in 2011 because China, Iran, and North Korea are unlikely to join, but he was especially concerned with the danger of pursuing “ponderous negotiations” with multiple nations at a “glacial pace” while the old INF hamstrung the United States and Russia violated it with impunity.

From that perspective, Trump’s withdrawal from the INF could pave the way for serious multilateral discussions with every nation that values intermediate-range missile capabilities. At the very least, it should be amusing listening to nations like China and Iran – and Trump administration critics at newspapers and think tanks – explain why they should be allowed to develop intermediate-range ground-launched missiles while the United States is not.