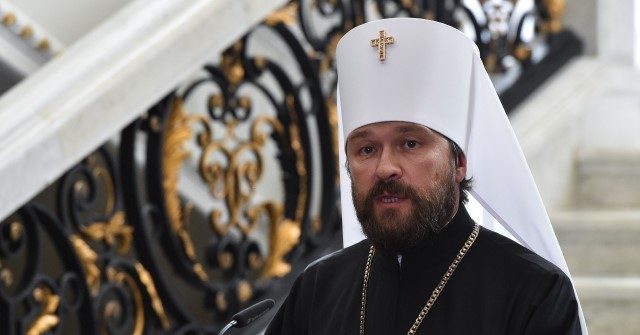 Russian Metropolitan Archbishop Hilarion Alfeyev warned this weekend that the United States is unnecessarily stoking fears of a war between Russia and Ukraine.

“Both as a clergyman and as a citizen, I am very worried and concerned by what is happening around us, as well as by the statements that one has to hear from different sides,” said Hilarion, who is archbishop of Volokolamsk and chairman of the Department of External Church Relations for the Russian Orthodox Church.

“On the one hand, we hear assurances from the leadership of the Russian Federation that Russia is not going to attack Ukraine,” he told Russian television. “We also hear from the lips of Ukrainian politicians that they do not see the threat of an attack from Russia.”

“The U.S., however, persistently continues to convince its Western partners that Russia is preparing for an attack and it is therefore necessary to take out embassy personnel from Ukraine and prepare for a full-scale war,” he added. “All this cannot but disturb and worry.”

The Russian Metropolitan also warned of shady interest groups interested in war between Russia and Ukraine.

“We also know that in America, and in Ukraine, and in Russia, there are politicians who believe that war is the right decision in this situation,” he said. “In America in particular, the arms lobby is interested in this.”

“In Ukraine, the political forces that have lost power and would like to regain it are interested in starting full-scale hostilities,” he declared. “And in Russia there are politicians who remind us that our country has never lost any war, therefore, ‘whoever comes to us with a sword will die by the sword.’”

War is never worth the cost, Hilarion asserted, even if Russia were to win.

“Let’s remember at what cost did Russia win those wars,” he said. “The price was millions of lives. Secondly, let’s recall that every war brings incalculable disasters to people. [And] an outcome of any war is unpredictable,” he reasoned.

“I am deeply convinced that a war is not a method of solving the accumulated political problems,” he stated. “Therefore, politicians and all of us must do everything in our power to prevent the escalation of the conflict and the development of events that the Americans are talking about today.”