Vyacheslav Volodin, speaker for the lower house of the Russian Parliament, claimed on Friday that Ukraine has been secretly massacring ethnic Russians in the war-torn Donbas region and hiding the corpses in mass graves with assistance from the United States and the North Atlantic Treaty Organization (NATO).

“Russia’s Investigative Committee opened a criminal case over the brutality committed against the civilian population, and these means and methods during armed conflicts are prohibited based on international accords,” Volodin said, as quoted by Russia’s state-run Tass news service.

“Kiev’s crimes are swept under the rug by Washington and Brussels. We see no condemnations or investigations of [these] crimes against humanity,” he said. He then railed, “We are talking about the deaths of people during the 2014 coup d’etat, when the Trade Union House in Odessa was set ablaze and during the punitive operations in Donbass.” Brussels is the location of NATO headquarters.

“If this is not genocide, then what is?” Volodin asked, deploying rhetoric the international community finds unnerving because it suspects Russia will use charges of “genocide” as a pretext for invading Ukraine.

Ukraine does have some experience with actual genocide – that is, being on the receiving end of it from Russia under dictator Joseph Stalin. The Holodomor was a man-made famine that killed some four million Ukrainians between 1931 and 1934. Some of Stalin’s victims were reduced to cannibalism. The starvation campaign was accompanied by an orchestrated effort to eradicate the culture and political leadership of Ukraine. 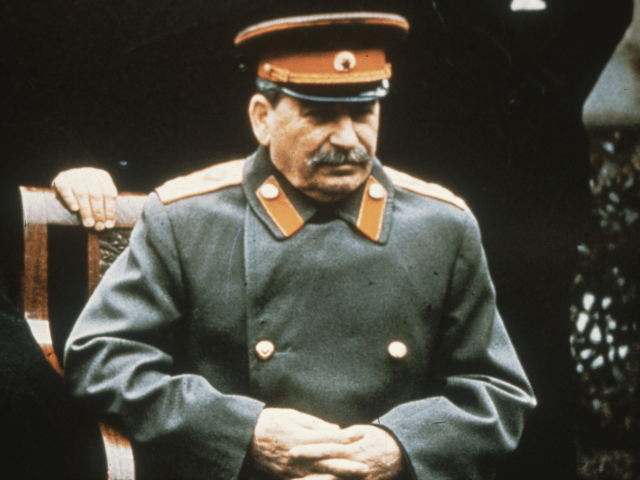 The Russian government was able to hide the full extent of the Holodomor from the world until the late 1980s, when some Ukrainians were moved to speak out by Moscow’s cover-up of the Chernobyl nuclear disaster.

The “coup d’etat” Volodin referred to was the popular ouster of Ukraine’s pro-Russian President Viktor Yanukovych in February 2014 following the Euromaidan uprising against his rule. Yanukovych, who was grotesquely corrupt even by Ukraine’s rather expansive standards, was found guilty of treason in absentia by a Ukrainian court in 2019 because of his efforts to crush the protests.

The Trade Union House fire in Odessa occurred in May 2014 after a protest march was ambushed by pro-Russian critics of the Maidan movement. 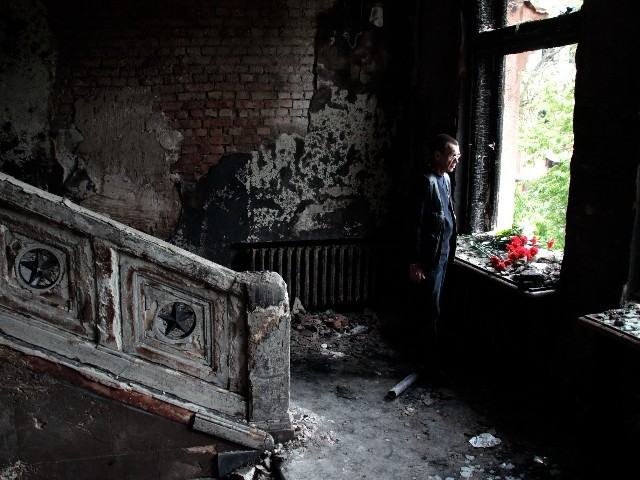 In this Sunday, May 4, 2014, file photo, a man lays flowers inside the burnt trade union building in Odessa, Ukraine (AP Photo/Sergei Poliakov).

Videos uploaded to social media showed Odessa police standing by while the pro-Russian forces attacked demonstrators with clubs, and shielding the Russians from stones the demonstrators flung in retaliation. The pro-Russian side of the melee claimed it struck in self-defense because the marchers were planning to attack a nearby camp they had established for demonstrations of their own.

The Trade Union House was apparently set ablaze by firebombs thrown during the vicious 15-minute street battle. Forty-two people were killed by the fire, or by leaping to their deaths from the third floor where they were trapped.

The circumstances around the Odessa fire remain murky eight years later, as both sides of the conflict accuse each other of either deliberately or negligently setting the Trade Union House ablaze. The United Nations criticized the Ukrainian government in 2019 for not investigating the incident thoroughly enough, while Russian officials declared a cover-up and accused the Ukrainian government of being “up to the elbows in blood,” a sentiment echoed in Volodin’s remarks on Friday.

Volodin said there was no “statute of limitations” on the crimes against humanity he charged Ukrainian officials with but castigated European agencies for supposedly overlooking Ukraine’s offenses while persecuting Russia.

“Instead of condemnation and a desire to get to the bottom of the matter, lawmakers from European parliaments, PACE and the OSCE PA stick their heads in the sand. There is a double standard here,” he grumbled.